Bruno Mars & Cardi B Are Dripping In ’90s ‘Finesse’ 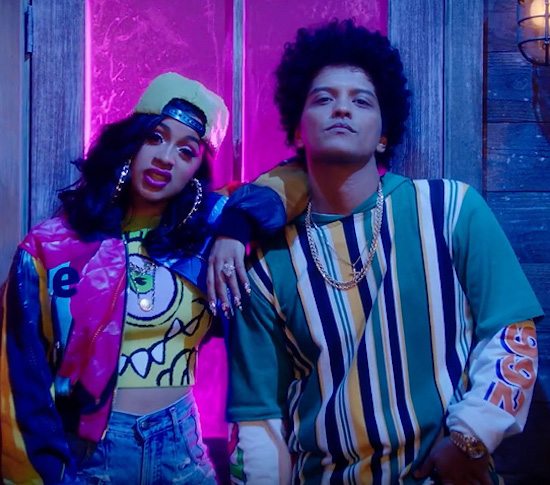 If you thought for a second that Cardi B's 15-minutes of fame were up, then she's back to let you know that you are sorely mistaken. The Bronx rapper has been on fire over the past year, making history in the past week by becoming only one of three artists to have their first three entries on the Billboard Hot 100 chart reach the top 10 all at the same time. Now she's back in your face, this time teaming up with singer Bruno Mars for a colorful, remixed version of his latest single, "Finesse."

In the Mars-directed clip, the two artists draw their inspiration from the intro to the '90s hit comedy show In Living Color. The throwback vibe meshes perfectly with Mars' sound and provides both artists the room to flex and have a little fun. Flanked by dancers, Mars showcases the slick dance moves that have made him one of today's most electrifying performers. DJ Rashida makes an appearance as one of several DJs on set. Meanwhile, Cardi's added verse stays true to her funny, self-aware style as she flexes her Rollie while delivering a word about being unbothered as she stacks her schmoney. Both artists look like they are genuinely having the time of their lives in the nostalgia-dipped video. When they both sing in unison "Don't it feel so good to be us?" you know for a fact that they mean every word.

And why wouldn't they? Mars just completed his successful 24K Magic World Tour that was also named the highest-grossing solo tour of 2017, produced his own live special on CBS and earned a couple of award noms. For her part, Cardi has been riding high, breaking records all over the world, earning her first GRAMMY nod and, just this past week, getting added to the 2018 Coachella line-up. Take this old-school-inspired video for a spin and see if it doesn't have you digging for your favorite Cross Colours jacket from back in the day.


TAGS:  bruno mars", cardi b, dj rashida
Previous: Anita Baker To Have Us Caught Up In The Rapture On Farewell Concert Tour Series Next: Trevor Jackson Shows You What Goes Down In The ‘Night Time’