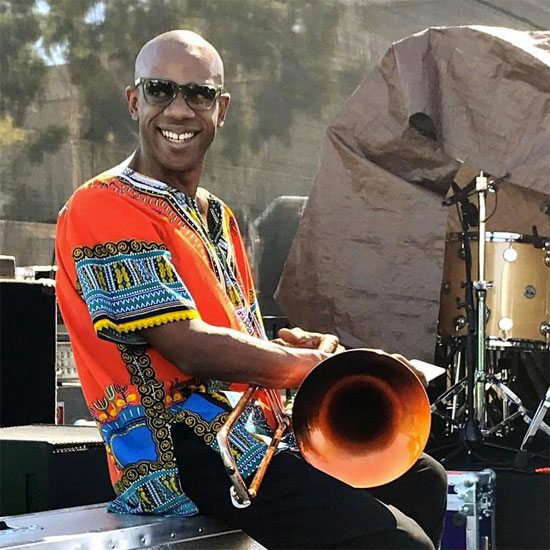 As gifted trombonist Ryan Porter gears up to release his album The Optimist, he's treated fans to two vibrant tracks from the project. The first, entitled “Night Court in Compton,” is five minutes of spirited, jazzy goodness. While Porter and Kamasi Washington take center stage with lots of brassy brilliance, Tony Austin’s percussion punctuates the tune while Cameron Graves adds a bit of elegance on keys. The second track, “The Instrumental Hip-Hoppa,” is a fiery follow-up to the single, with its equally festive energy and hypnotic groove. For this track, Porter says he specifically set out to alter the way his peers view jazz music. He says he wanted to create, “something that could have the traditional elements of jazz, but at the same time reflect the fact that I have been heavily influenced by Hip-Hop, Gangsta Rap, '70s Soul, Funk and R&B.” With one spin of this tune, it seems his goal was accomplished, as each element mentioned comes all the way through in the finished product.

Though The Optimist will undoubtedly offer a crisp and contemporary sound, most will be surprised to learn that the album was actually recorded nearly 10 years ago, between 2008 and 2009. With the assistance of his brothers-in-music and Los Angeles music scene veterans Kamasi Washington (tenor saxophone), Miles Mosley (upright bass), Cameron Graves (piano, fender rhodes), Tony Austin (drums), Jumaane Smith (trumpet), Edward Livingston (upright bass), Aaron Haggerty (drums), Brandon Coleman (fender rhodes), Dominic Therioux (electric bass), Robert Miller (drums) and Lyndon Rochelle (drums), the West Coast Get Down collective have created magic once again. Kamasi’s 2015 studio album The Epic was the masterpiece that quickly catapulted the collaborative to countless mentions among jazz greats and beyond. Though Porter’s gifts via the trombone will serve as the focal point, his upcoming album will no doubt continue the theme of blending genres in the fresh and masterful way, making jazz more approachable for the masses.

Check out Ryan Porter’s mood-elevating tracks “Night Court in Compton” and “The Instrumental Hip-Hoppa” below. His two-disc album The Optimist will be released on February 23rd via World Galaxy on all digital platforms, and can be pre-ordered now. Keep up with Ryan and all his moves via Facebook, Instagram and Twitter.