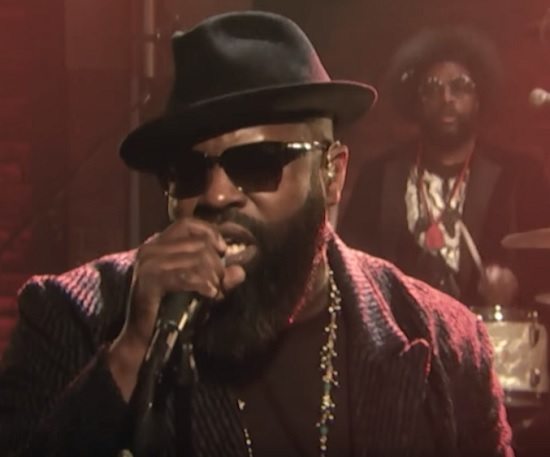 Awards season is in full swing and, unsurprisingly, it looks like Detroit has mostly been shut out of the conversation altogether. The same can't be said for "It Ain't Fair," the soulful, searing single lifted from the film's soundtrack. In hopes of eventually seeing it pop up when the Oscars nominations roll out, The Roots and featured vocalist Bilal have been on an award tour of sorts, hitting up late night television and other venues to give the track some shine. Their most recent stop just happened to be on their Tonight Show main gig's sister show, Late Night With Seth Meyers, where they once again delivered the goods.

As per usual, the fellas put it down on the stage. This particular performance begins with the lights turned down low as an impeccably dressed Bilal sings along with the piano playing of James Poyser. The lights are soon turned up, revealing Black Thought, Questlove and the rest of the crew along with a brass section. Black Thought, fresh off his highly publicized 10-minute freestyle, tears into his fiery verses as the music picks up in intensity, creating an interesting push-and-pull tension within the song that reflects both the lyrics and the struggle that they're representing. Though this isn't the first time we've seen this one performed, this iteration might just be the best one yet.

Though this song wasn't among the number at this week's Golden Globes, we feel it definitely has a shot at making the Oscars ballot and, hopefully, we'll get to see them take it to that illustrious stage on the film industry's biggest night. Until then, check out the latest performance from The Roots, Bilal and the rest of the crew when you press play.