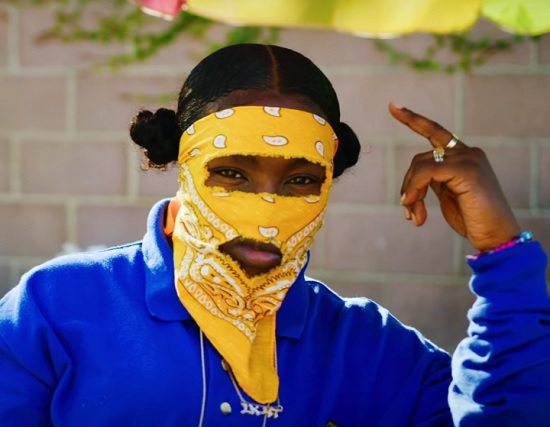 We already told you that Leikeli47 is someone you should be watching. The hip-hop artist's debut album, Wash And Set, is filled with back-to-back (-to-back) jams and some of the most innovative hip-hop we've heard in a while. Don't believe us? Then allow us to present reason No. 412: her video for the single "Attitude."

The song, a mixture of rap, house and a splash of Baltimore club, found on both her debut and Insecure's Season 2 soundtrack. So it's fitting, then, that Leikeli47's video features references to both. It opens in a sunny space reminiscent of Insecure's L.A. setting, but that's not all to be found that ties in the show. A pool with heart-shaped floaties recalls Season 2's poster, Leikeli rocks a long-sleeved Best Buy polo (hey, LawrenceHive!) and the clip's featured guest (and ballroom culture legend) Buffy Khan can be seen reading a copy of Issa Rae's memoir. After soaking up some sun and throwing some serious shade poolside, the twosome head indoors to recreate Wash And Set's cover, complete with a neon "Bismillah" sign. However, since this song's all about feeling yourself, Leikeli classes it up with a white fur as she and Buffy stunt on her red leather couch while praising the divinity of Kelis and Beyoncé.

Once again, Leikeli47 delivers big time with her over-the-top visual style, making this one "Attitude" we don't mind catching. Check her out in the clip right here and stick around to watch her reimagine the track with the Brooklyn United Marching Band Sony's Lost In Music Sessions.