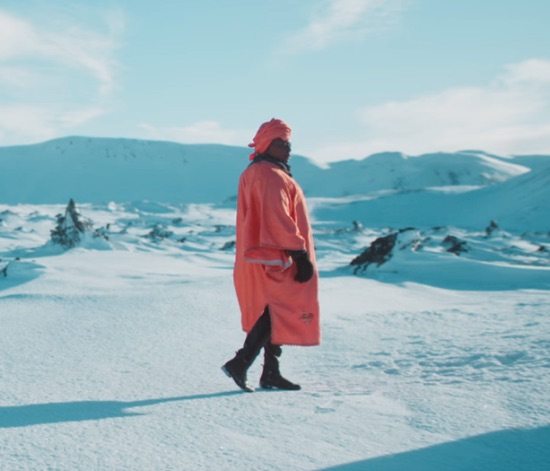 After blessing the world with her rendition of Prince's "Sometimes It Snows In April," Meshell Ndegeocello is rolling out more singles from her forthcoming album Ventriloquism. As we get closer to its release next month, she treats fans to another track from the cover album – her remake of TLC's "Waterfalls" – and its video shot on location in Iceland. Directed by Damani Baker, the stunning visuals feature women and men traveling on foot across a snowy, desolate landscape. The video follows the slowed down pace of the song, where Meshell's signature vocals roll atop a beautiful guitar and mesmerizing keys.

About the video and its director, Meshell said, "I love Damani and his work and I knew he would create something with both weight and air, something that reflects both heaviness of heart and the endurance of hope. That’s what this song feels like to me." Damani also chimed in via press release sharing, "I wanted to celebrate brown people leading the way forward, how our marginality and struggle affords us a unique perspective in this moment where so many people are finding themselves thrust to the margins of our economy, political systems, and habitat."

Ventriloquism makes it debut on March 16th and is available for pre-order from your favorite digital retailer. The album also features uniquely Meshell versions of songs by George Clinton, Sade, Janet Jackson, Tina Turner and more. Along with the new album, comes a tour. The singer gets on the road March 18th, kicking things off in Birmingham, Alabama and working her way over to the West Coast by the first week of May. Bundle up and watch the latest video for Meshell Ndegeocello's chilly take on "Waterfalls" right here.


TAGS:  Damani Baker, meshell ndegeocello, prince, tlc
Previous: Iconic Femcee Roxanne Shanté’s Story To Be Told In Netflix Biopic ‘Roxanne Roxanne’ Next: T-Pain Runs Away With The Bride In ‘May I’