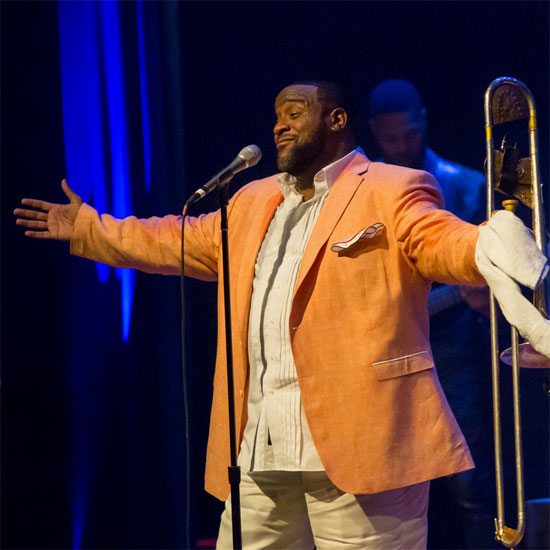 Since the 2015 release of Jeff Bradshaw's last album, Home: One Special Night At the Kimmel Center, he's been through a lot, most notably a very serious medical issue that affected his health and well-being. But Jeff is a fighter, and though he was down, he didn't get taken out. The world-renown trombonist has bounced back and is stronger than ever. Reflecting his new lease on life, Bradshaw will be releasing his third studio album in late spring appropriately titled Stronger. In advance of the official first single dropping in the coming weeks, Jeff is giving SoulBouncers an exclusive sneak preview of what's to come with the buzz single "Stay" featuring the magnificent DJ Jazzy Jeff and R&B/soul man Jeff Murrell.

The three Jeffs come together like a soul Voltron on "Stay." Murrell handles the vocals as he persuades his lady friend to stay and play a little while, chile. Under normal circumstances, this wouldn't be a problem, but there's a catch. "We both got situations back at home / But right now, girl, I can't seem to leave you alone," Murrell sings in the first verse and we quickly realize that this is a clandestine affair in the making. Jeff Murrell, whose voice gives us shades of Brian McKnight, makes doing wrong sound oh-so-right on the production by Bradshaw and Brandon Young. Atop a Stro Elliott beat, scratches by DJ Jazzy Jeff and Jeff Bradshaw's masterful trombone, this track is the perfect blend of soul, jazz and hip-hop.

In addition to DJ Jazzy Jeff and Jeff Murrell, Stronger will feature special guests Frank McComb, Glenn Lewis, Raheem DeVaughn, Robert Glasper, Amber Jeanne Navran of Moonchild, Paula Champion, Micki Miller and more surprises. We spoke to Jeff about it and he told us, "It's my favorite album to date." With all this talent on board on the microphone and behind the scenes, we don't doubt that this album will not only be Jeff's favorite but become one for fans as well.

Get into Jeff Bradshaw's brand new groove with SoulBounce's exclusive world premiere of "Stay" right here. If you're anywhere near the DMV area for Valentine's Day, be sure to attend Jeff Bradshaw & Friends "A Love Supreme" with Avant & Maimouna Youssef concerts on Tuesday, February 13th and Wednesday, February 14th at Bethesda Blues & Jazz Supper Club.