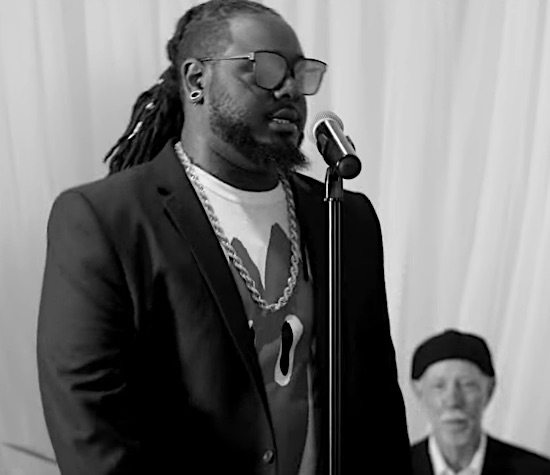 T-Pain has been making waves as of late for singing sans his signature Auto-Tune. After showing out at his Tiny Desk Concert and amazing people that he can actually sing, T-Pain reclaimed some of his former glory. But, for his latest single, “May I,” the “Sprung” singer employs his digitized tenor to win back the heart of his girl. Thankfully, that doesn’t stop the track from being fun and innovative.

"So may I have this dance? / Cause I, all I got one last chance/ So just breathe," pleads T-Pain on the chorus for “May I.” He’s trying humbly to win back the heart of an old flame. Guest star Mr. Talkbox plays wingman, offering some Roger Troutman-esque vocals to help his man out. For “May I,” T-Pain has combined his usual trap sensibilities with a little easy listening, jazzy R&B. The track vacillates between some tickling of the ivories, to some heavy bass and synths. It makes for a very pleasant and experimental backdrop for T-Pain to make his final plea.

In the black-and-white video for the track, T-Pain plays a wedding singer who has a secret past with the bride. Tallahassee Pain, of course, has a lot of fun playing this role, doing all the extra stuff that makes cheesy wedding singers so fun to watch. Meanwhile, the bride and groom are getting ready for their special day, but the wedding can’t go off with a hitch. It turns out the groom had a little too much fun at his bachelor party, and there's an incriminating video that the bride sees. Heartbroken, the bride meets T-Pain outside on his smoke break and runs away with him, leaving her former fiancé at the altar. The duo then drives through the city, and in the last scene the black-and-white visual turns to bright neon color as T and his girl roll up to the club.

“May I” appears on T-Pain’s recently released album Oblivion. The star recently had to defend himself as one of the people named in Quincy Jones’s recent tirade. Apparently, Q was not happy with the way Teddy Pain covered Michael Jackson's “PYT” – and, actually, neither was T-Pain. Whatever the case, “May I” certainly finds T-Pain in his creative comfort zone. Check out the video to see you would like to book T-Pain for your next wedding, bat mitzvah or family reunion. We don’t’ think he’ll try to steal your girl in real life.