You’re Gonna ‘Be Lovin’ This Acoustic Performance From The Hamiltones 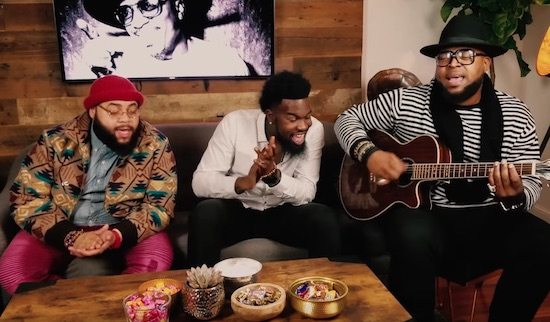 The Hamiltones, Anthony Hamilton’s infamous backup singers who can make you laugh, cry and feel some kind of way with their amazing voices, have been relatively quiet lately. Sure, they've turned up on PJ Morton's "Everything's Gonna Be Alright," but that's not what we're talking about. We're talking about them taking over our social media feeds with incredible covers and hilarious ditties about everything from President Cheeto to baby farm animals. Whereas we miss their comedic viral videos, we do understand that they’ve been busy plotting their next move: releasing their debut album. They've released a sprinkling of original songs since 2016, but 2018 is their year to truly break out. To prep us for what's to come, the GRAMMY nominees paid a visit to Hard Knock TV for an acoustic performance of their new song “Gotta Be Lovin Me.”

In the short video, shot entirely on Samsung Galaxy S8 devices, AHam briefly introduces the guys who launch into an effortlessly dope performance while casually sitting on a couch. Armed with only a guitar, a few hand claps, some foot stomps and their soulful harmonies, 2E, J. Vito and Tony Lelo take turns going to town on “Gotta Be Lovin Me,” which will be found on The Hamiltones' highly anticipated debut.

After years of standing 20 feet from stardom supporting Anthony Hamilton, the group is planning to take their rightful place in the limelight soon. Keep it locked right here for more information on the upcoming project from The Hamiltones as we continue to document their ascent. Until then, hit play and get into these heavenly harmonies.


TAGS:  2E, anthony hamilton, J.Vito, pj morton, The Hamiltones, Tony Lelo
Previous: T-Pain Runs Away With The Bride In ‘May I’ Next: Taking A Voyage To Wakanda In The 2018 Mitsubishi Outlander SEL 2.4