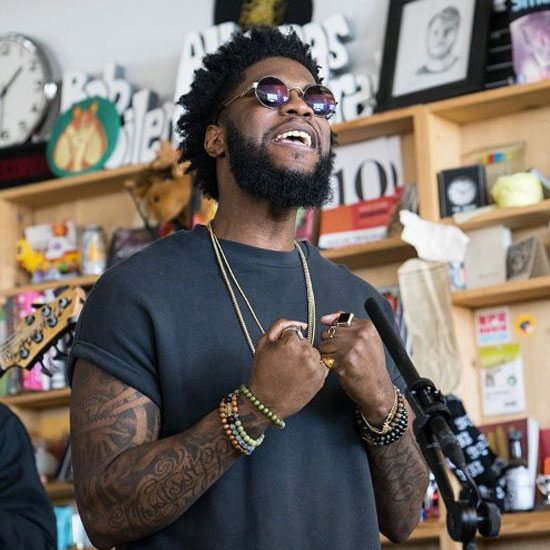 Big K.R.I.T. is days away from starting his Heavy Is The Crown Tour that will take him from city-to-city and coast-to-coast through the end of April. If you can't wait to see K.R.I.T. live and need a fix right now, then you're in luck because the Mississippi maestro recently pulled up on NPR's Washington, D.C. headquarters to spit a few bars for their Tiny Desk Concert series.

Performing songs from his 2017 double disc, 4EVA is a Mighty Long Time, Big K.R.I.T. choose three selections from the Justin Scott (his real name) side of the album. Backed up by super-producer Bryan-Michael Cox on keys, Burniss Travis II on bass and Justin Tyson on drums, the instrumental trio set the tone for the subdued set. K.R.I.T. began with the introspective cut "Mixed Messages," where he examines the duality throughout his life while both rapping and singing. After mesmerizing the audience with the cut, he briefly shared about his battles with depression and the influence that his grandmother had on him. He reminisced about when they'd go to church together and how she always had to wake him up during the service before launching into his single "Keep The devil Off." K.R.I.T. continued showing love to his dearly departed grandmother, who he called his "first mix engineer," and entertained all who gathered to see him by playing a cassette tape recording of him and his brother singing Donell Jones' "Where I Wanna Be" that she made in 1999. He broke out her actual portable cassette player and everything. It was a tender, touching moment, and hearing young Justin and his brother warble was too cute for words. Big K.R.I.T. was a little emotional after that and had to shake the nerves off before performing the last song of his mini-concert, "Bury Me In Gold."

Big K.R.I.T. may be known for his hard-hitting, Southern-fried rhymes over bass-heavy beats, but this vulnerable, toned-down Tiny Desk Concert was the perfect introduction to Justin Scott.