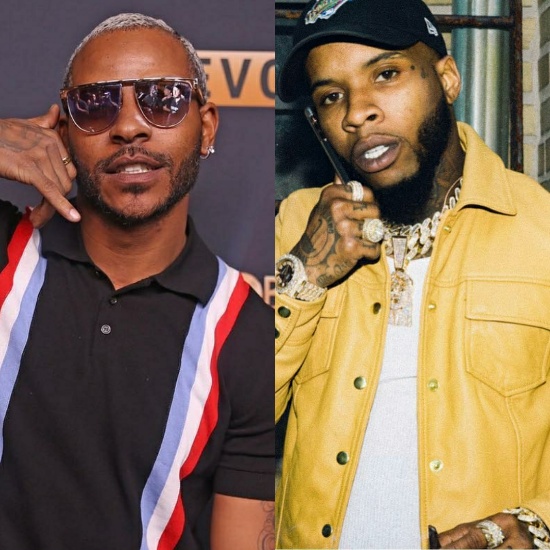 When shots are fired on an R&B track, all you can do is duck and seek cover. Launching a soulful grenade this week is crooner Eric Bellinger, who has officially had enough of singer/emcee Tory Lanez. Mr. Bellinger has for the past year asked Mr. Lanez to stop using his signature tag, "This gon' be your favorite song," but Tory has yet to comply. As a matter of fact, after Bellinger put his cease and desist message out in the universe, Tory clapped back in his track "Hate To Say" from his recent release Memories Don’t Die. Today, using the same beat from Tory's track, Bellinger unleashes the fury and not so kindly asks Tory to stay in his lane and calls him all types of thief.

"You're only talent is mimicking anyone that's talented," Bellinger harmonizes. "Stole a vibe from Trey Songz / Took a flow a from K. Dot / Kinda sound like Fetty Wap / Dammit Tory, when will it stop?" sings Bellinger. There are quite a few quotables on the almost four-minute diss track, as Bellinger calls Tory out of his name and promotes his upcoming album Eazy Call at the same time. Things get even uglier when Bellinger sings, "You even stole the song you dissed me on," before he ends the track, politely handing Tory his 'L.' Don't forget to peep the bloodied, severed head on the single cover art. Yikes indeed.

When he's not throwing shade at fellow artists, Bellinger is riding the promo train for his upcoming release. Last week, he debuted "Ain't Ya Ex," the first single taken from the singer's new album Eazy Call, set to drop April 6th. We last got an EP from Bellinger last year, when he dropped Eric B for President: Term 2 and we can't wait to hear what he's cooked up on the new album. While "Yikes" likely won't be featured on the new project, we're at least clear on the fact that Bellinger is not one to mess with. Listen to his diss track "Yikes" right here and let us know who won this R&Beef.