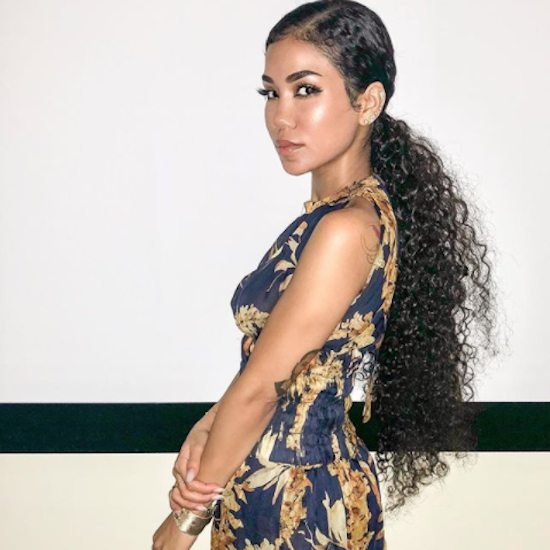 Say what you want about Jhené Aiko, but the good sis stays on the grind. In less than two years, she's dropped her collabo project, TWENTY88, alongside her now-boyfriend Big Sean; released a short film, Trip, alongside its accompanying album Trip 17; and lent her vocals to the likes of Gallant on his hit single, "Skipping Stones." And that's not even counting her book of poetry, 2Fish, that just dropped last month, her multiple festival appearances, or her stint as the opener Snoop Dogg and Wiz Khalifa's successful The High Road Summer Tour. Though in recent weeks, she's been crisscrossing the globe where she's been spotted in the front rows during Fashion Week in both Paris and New York, she also found the time to stop by the Spotify Studios to bless them with a live acoustic performance.

Aiko hit the booth to perform a stripped-down version of her current single, "Sativa." With Rae Sremmud's Swae Lee and Slim Jxmmi, who appear on the song's original version, absent, "Sativa" takes on an entirely new feel. A harp sets the stage for the soothing rendition, leaving more than enough room for the singer's delicate voice to take center stage. While she's far from a vocal powerhouse, Aiko has perfected how to make good use of her voice, letting it float across space like a breath of fresh air. Also recorded during the same session is Aiko's take on 2pac's 1993 classic "Keep Ya Head Up." As on "Sativa," she manages to inject the hip-hop song with a heavy dose of soul-soothing vibes. In her hands, the empowerment anthem feels personal, almost as if the lyrics were self-penned.

So ease yourself into the weekend with this tranquil and peaceful performances and see if Aiko's jaunt to the Spotify Studios doesn't melt away all of your work week troubles.


TAGS:  audio, big sean, jhene aiko, Rae Sremmud, Slim Jxmmi, Swae Lee
Previous: Kenny Lattimore Knows How To ‘Stay On Your Mind’ Next: This Week In SoulBounce: Rick Ross Rushed To The Hospital, Beyoncé Is On Her Vegan Grind For Coachella, SZA’s ‘Mad As Hell’ About Losing At GRAMMYs & More