J. Cole Warns Us About The Love Of Money On ‘ATM’ & Drops New Album ‘KOD’ 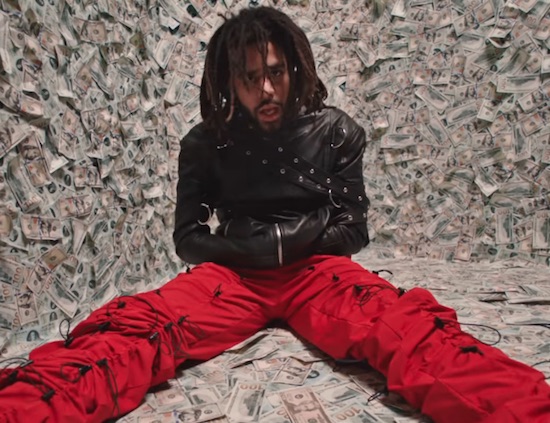 Earlier this week, J. Cole warned us he’d be dropping a new album on April 20th. If you were awake at midnight, you might have already heard his legion of fans hastily calling KOD a masterpiece all across social media. While the album still has to stand the test of time, or at least the first 24 hours of release, what we can say is that Mr. Jermaine Cole didn’t come to play on the project's first single, “ATM.”

“ATM” is a scathing track about the love of money and how it has affected his life. Over a rumbling but subdued sound bed, Cole spits witty lines like, “Remember the teachers was all on my ass / Now look all of them, pitiful /And all of a sudden I'm so good at math.” The track ties into the underlying messages about drug use and addition on the album, as J. Cole struggles with his love of money and what we’d do without it.

When J. Cole announced that he would be dropping his fifth album on 4/20, we figured it was a coincidence that it was dropping on the sticky icky holiday. However, we didn’t know he would serve his fans/fiends with an appropriately trippy music video for the occasion. Directed by Cole and Scott Lazer, the "ATM" visual is a fractured fairytale about the love of money. As the old adage goes, a fool and his money are soon parted, and, boy, does J. Cole and his funds have a nasty breakup. Playing multiple characters, we watch as the star takes us through some extreme highs and lows to prove his point.

The clip starts with J. Cole, dressed like the king depicted on his album cover, soaring through the sky on his throne with a group of kids riding high on prescription medicine bottles trying to catch the dollar bill attached to his fishing pole. The children break into the bedroom of another character played by Cole, grabbing all the cash in sight and causing Cole and his girl to flee. They end up at a casino and try to go double or nothing to win some cash back. Unfortunately, they end up losing. Next, Cole and his girl arrive at a used car lot, but, with no money left, Cole literally gives up an arm and a leg to get a pre-owned futuristic Cadillac. As he and his girl ride off in the sunset, they see King Cole in the sky still waving his dollar from his fishing pole. Cole shifts his car into flight mode trying to grab the bill, but the car runs out of gas before he can get the cash. His car plummets to the ground just as the lyric, “Will I fall or will I fly,” plays. The clip ends with the searing message “Choose Wisely.”

While the track is what we’ve come to know and love from J. Cole, the video for “ATM” sees the artist trying something new, adding another element of artistry to his storytelling. There are a number of blatant and subliminal messages about money, wealth and power in the clip. Beyond the big bold message, the cartoonish, Busta Rhymes "Give Me Some More"-esque visuals keep things interesting. Hit play below to listen to the track and get into the trippy visuals. When you're done, give J. Cole's KOD a listen to hear him talk his ish and share some important social and cultural commentary.