John Legend Has ‘A Good Night’ On ‘Ellen’ 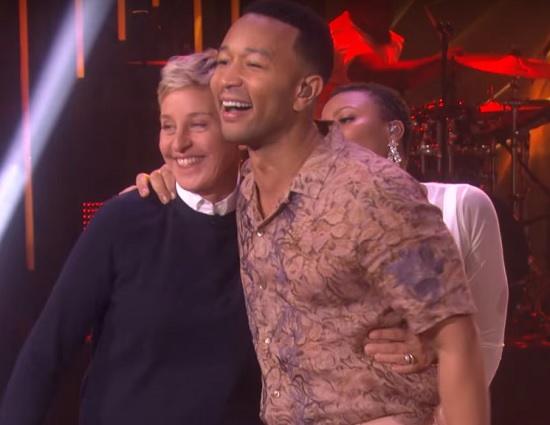 John Legend has a lot to smile about these days. And who better to share a smile with than perennially smiling talk show host Ellen DeGeneres? John did just that this week when he stopped by Ellen to chat about what's going on in his life, from Jesus Christ Superstar to the impending birth of his second child with wife Chrissy Teigen. After shooting the breeze with Ellen and playing a fun game where he proved he knew far more about this wife than she knew about him, John decided to give the audience what they'd been waiting for: a performance of his new Bloodpop®-assisted single "A Good Night."

Flanked by his band, John was once again all smiles as he sang the song essentially about finding love in the club. John snapped and swayed his way through the groove on the stage before feeling the spirit and walking into the audience. The ladies of the audience didn't seem to mind his presence one bit, as they swooned while he serenaded them. Then John was back to the stage to cut a rug to the song's final moments, inviting Ellen to join in the festivities as confetti showered the stage.

With its two-step-ability and John Legend's infectious energy while performing the track, don't be surprised if "A Good Night" becomes the song of the summer for the grown folks. Check out John making a case for just that while performing on Ellen below.