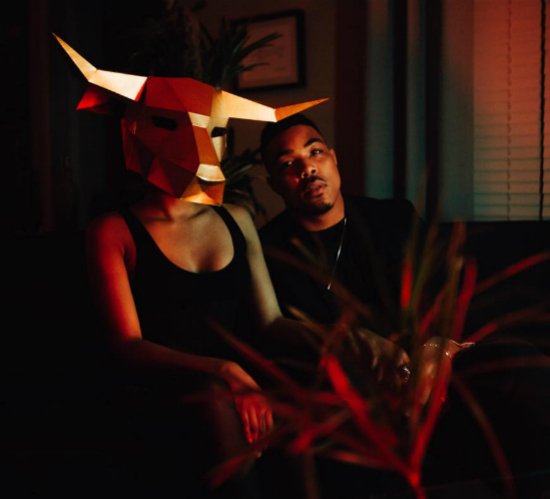 Marcus Alan Ward is back with new music in the form of his latest single "LoveOutLoud" and accompanying visuals for the slow burning track. The song is a sultry addition to his electro-synth catalog, which is part of the reason why we fell in love with the Cleveland-bred artist in the first place. The soulful singer, composer and lyricist gives us an interesting take on what appears to be some psychedelic love with the Josh Tep-directed visuals. The new track hails from his latest album Beast, and while "LoveOutLoud" sounds intentionally romantic, it was created with a collection of Marcus' own vocal samples, conversations and even voicemails from life.

Before you press play on the video, there is a seizure warning considering the visual elements explore pulse and light. Once you get through the first minute at least, you realize you're watching a woman in a tank top with a gold bull's head seducing Marcus, who primarily sits at his piano or in a love seat. Throughout the video, she stalks around the house, while Marcus keeps his cool and sings. The funky video matches the warm tones of Marcus' voice and could help you heat things up if you add it to your Netflix and chill playlist.

We last caught up with Marcus when he covered Drake's "Passionfruit" last year, but now with a new project under his belt, we're excited to get more singles and videos. Ward plans to hit the road the next few months, spreading his love for synth and soul to cities like Cincinnati, Columbus and Detroit along with first-time stops like Atlanta and Los Angeles. You can get his latest album Beast on his website and "LoveOutLoud" on iTunes. Check out his website for more tour dates, and watch the trippy video for "LoveOutLoud" right here.


TAGS:  drake, Josh Tep, Marcus Alan Ward
Previous: ‘Take A Ride’ With Rose Gold Next: Rolling To The 2018 Jazz In The Gardens Music Fest In The 2018 GMC Terrain Denali