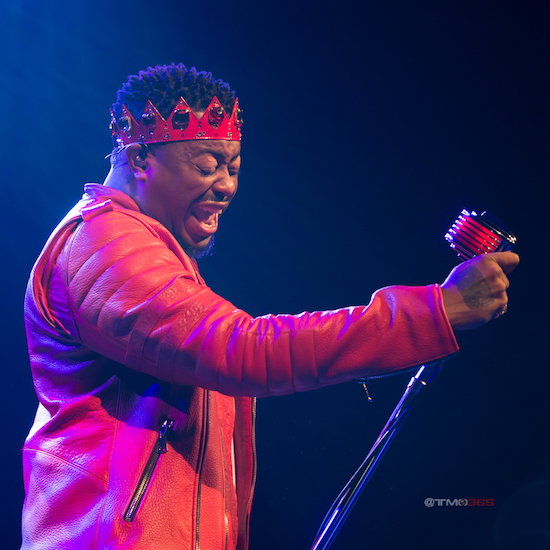 Raheem DeVaughn has been going buck wild in the studio lately. Yes, he's been busy at work on his sixth album, Decade of a Love King, but he's also been taking some time to drop a steady stream of refixes for his Beat Jack series. We almost can't keep up with the frequency of his covers. Just last week, we reported about his renditions of SZA's "The Weekend," James Blake's "Retrograde" and Sabrina Claudio and Khalid's "Don't Let Me Down."  Believe it or not, Raheem already has four more reworks for our listening pleasure: Ro James' "Outside The Box (How Bout That)," Drake's "Nice For What," Tink's "Faded" and Syd's "Body."

For his cover of "Outside The Box (How Bout That)," Raheen turns the temperature up even hotter on the steamy bedroom banger from Ro's Smoke EP.  DeVaughn takes over the song with a new first verse extolling the virtues of sex with him before handing the mic back to Ro for the remainder of the track. Rah sprinkles a few ad-libs and harmonies here and there for the rest of the song and now has us wanting a legit duet between these two.

DeVaughn next jumps on the No. 1 song in the country and joins Drake in his lovefest for the ladies. Radio Raheem dedicates his "Nice For What" Beat Jack to all the WCWs and proceeds to have his own lyrical praise party. Here again, he replaces the song's first verse with his own before Drizzy appears on the chorus and second verse. DeVaughn chimes in on the chorus, however, he censors the word n****as and replaces it with suckas to make it more PG. Otherwise, the Beat Jack cranks just as much as the original.

Next up for the Raheem treatment is Tink's "Faded" from her recently released EP Pain & Pleasure. The slinky slow jam is right in DeVaughn's wheelhouse as he kicks off the track singing about an intoxicating sexual encounter. DeVaughn blends Tink's vocals back in about midway through, and he adds some of his signature vocal flourishes before she carries the song home.

Last but certainly not least is the newest Love King Beat Jack of Syd's sultry single "Body." Once again, Rah leads the remix off with his take on the first verse. He changes up the lyrics but retains its sexy tone. Raheem loops Syd back in on the chorus, adding his harmonies and ad-libs in the background. He turns this song into a duet that sounds like the soundtrack to one sensual fantasy.

We don't know how many more Beat Jack remixes Raheem DeVaughn has in his arsenal, but we eagerly anticipate what he flips next. And knowing him like we do, he won't keep us waiting long. Until DeVaughn decides to bless fans with new original songs, his Beat Jack series is holding us over just fine.