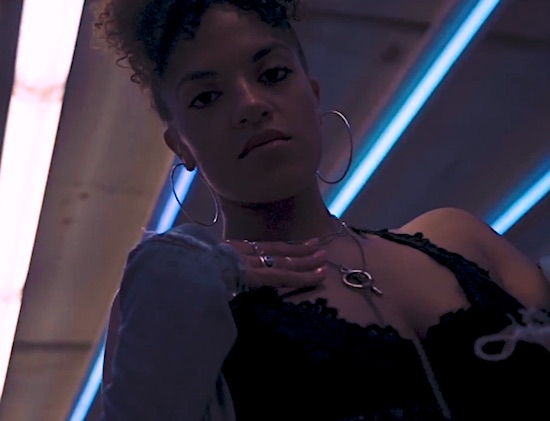 Samantha Patten discovered her passion for music early, but the road from her discovery to her destiny has been a winding path instead of a straight shot. She honed her singing, songwriting and performance skills as a youth and studied audio production in college before she secured an internship and later a job at Epic Records. Working in the music industry was all fine and good with steady paychecks and benefits, but she wanted to work on her music full-time instead. Years of soul-searching led Samantha to make the tough decision in 2017 to quit her day job, take her passion and make it happen. And we're glad that she did. After releasing two buzz tracks, Samantha has garnered more attention with her relatable single "Home Alone" and is bringing the track to life in its music video in an exclusive SoulBounce world premiere.

Described as "an anthem for the ladies," "Home Alone" details a late-night and her man is nowhere to be found. He won't answer his phone, and Patten is none too pleased with his antics. "It's 4 in the morning / I called you twice / I called you three times / Where the hell are you?" she sings, but she's on to his game. "You must be out drinking / Got b***hes and bottles / Well trained in the game / Won't answer my calls / Cuz it's easy to lie with a girl with no name," Patten laments over a pop soul production by Matt Fredette and Chelsea Castillo featuring Solo Woods on guitar. Samantha is outdone but doesn't become undone even though she knows it's pretty much a wrap on this relationship.

We see the song's scenario play out in the Youssef Lehnin-directed music video. The clip begins with a scene of Samantha's boyfriend in his car frantically calling her at 4:07 a.m. Her cell phone rings, but it goes unanswered. The events leading up to this moment are shown throughout the video as we view Samantha earlier in the night getting dressed up to go out...alone. That wasn't her plan to roll solo because she tries to reach her bae all night while she's posted up at a bar with a friendly bartender pouring her drinks. Her dude is preoccupied at another function with another woman, however, and ignores Samantha's calls. She leaves the bar and links up with her friends to dance in the streets before heading home. Instead of spending the rest of the night fretting over her so-called man, she decides to invite someone else over who comes knocking at 4:05 a.m in a bit of a plot twist that serves her boyfriend right.

"The concept of the video was so vivid once we finished the song," Samantha shared with us via email about the clip's creative vision. "I think it says a lot about how this generation views and values relationships. We’re somehow the worst communicators despite the fact that we have multiple devices on us at all times and their main purpose is for communicating."

"Home Alone" is the first single from Samantha Patten's upcoming debut album slated for release later this year. She is definitely an artist to watch, and you can keep tabs on her via Facebook, Twitter and Instagram and hear more from her on SoundCloud.