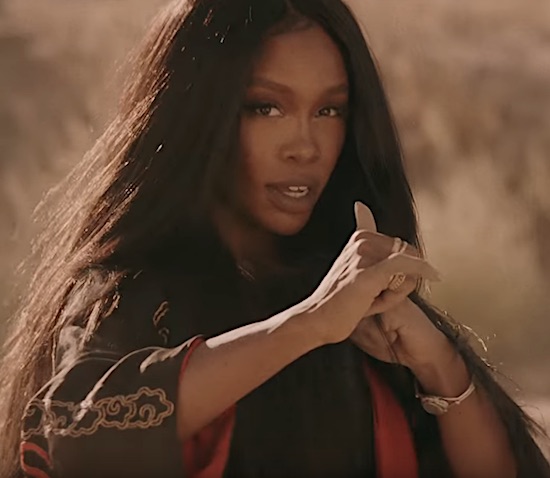 We’ve been waiting on SZA to release the video for her track “Doves in the Wind” featuring Kendrick Lamar for a while now. It was filmed around the same time as the clip for “The Weekend,” and the nonchalance about its release only made us more interested in the visual. After curving us by sharing the clip for “Broken Clocks” first, “Doves in the Wind” is finally here.

“Doves in the Wind” is a playful duet where SZA and Kendrick trade a few raw lyrics and opinions about f**k boys. SZA tells us, “Real n****s do not deserve p***y,” setting the tone for the track. Meanwhile, K. Dot brags about his sexual prowess over old heads.

The battle of the sexes continues in the Nabil-directed visual. But you know SZA and Kendrick aren’t going to give you anything too straightforward. It’s either dripping with symbolism, hilarity or both. For “Doves in the Wind,” we get the second option, a hilarious spoof on the kung fu flicks from the 1970s. You have the horrible voice dubs and sound effects, over-the-top stunts and additional ridiculous elements from the classic imported films.

The saga begins with SZA traveling towards a mountain in the distance on an armored horse, her perfectly straightened locks blowing in the air. On the mountaintop looking down on her, figuratively and literally, is Kendrick. After greeting a few ninjas and dodging some darts and Avatar air blasts from Kendrick, she meets the rhyme slayer on the mountain for tea. There the true battle commences, as the warriors get their Mortal Kombat on. The clip ends with SZA unleashing a Liu Kang bicycle kick attack before ascending into the sky as the new master.

"Doves in the Wind" is the latest release from SZA's critically acclaimed debut CTRL. The singer plans to re-release the album later this year with a few new tracks and surprises. In addition, you can catch SZA, Kendrick Lamar and their TDE Entertainment labelmates on the upcoming The Championship Tour kicking off May 4th in Vancouver.