Tank And The Bangas Ink Label Deal & Invite You Over To ‘Smoke.Netflix.Chill’ 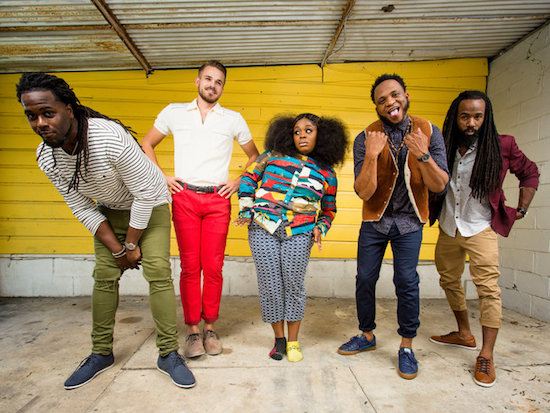 Since being crowned the winners of NPR Music's 2017 Tiny Desk Contest, Tank and the Bangas have been spreading their brand of cheery soul around the world. While the New Orleans-based band had built up quite a following around the globe thanks to their energetic live show, the recognition from NPR was the boost that the group needed, catapulting them into stardom and earning them countless new fans in the process. Now the band, fronted by lead singer-songwriter Tarriona "Tank" Ball is back with a new label home and a new single called "Smoke.Netflix.Chill" to celebrate.

After winning the Tiny Desk Contest, the band consisting of Ball, keyboardist Merell Burkett, drummer Joshua Johnson, saxophonist Albert Allenbeck and bassist Norman Spence, recently inked their first major label deal with Verve Forecast. For their first release for Verve, the group breaks fans off with more of the fun sounds that drew us in in the first place. The single finds Ball lamenting the days when her boo thang used to come through to put one in the air and just chill. Instead, she finds that now he seems to only want one thing, leading her to finally confront him about his change.

"I wanted to tell this story from a girl's perspective — a girl that actually wants to chill, instead of the guy pushing for it. I wanted to see where that could go," she explained to NPR about the song's origin. Tank's usual quirky style takes center stage, bringing the song's story to life as she takes the young man to task over the record scratches of fellow New Orleanian DJ RQ Away. It is a song that many can surely identify with in some way, shape or form and provides the perfect reintroduction to the public from the band as we wait for the follow-up to their independently-released Think Tank album. Take Tank and the Bangas' latest for a spin and add these sunny springtime vibes to your playlists.