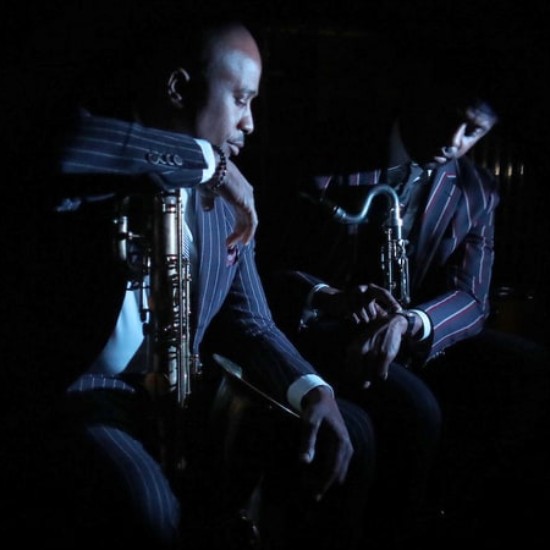 Soulful supergroups have been jumpin' off this year and our playlists are the better for it. So far, we've been grooving to Chris Dave and the Drumhedz, August Greene, R+R=NOW and Freelance to name a few. Now we can add the dynamic duo of Ali Shaheed Muhammad and Adrian Younge – collectively known as The Midnight Hour – to the mix as they prep for the release of their eponymous debut album.

While the album marks their first official studio release, the A Tribe Called Quest producer/DJ and Linear Lab head/producer/composer already have a pretty impressive collaborative history, dating back to Souls of Mischief's 2014 album, There Is Only Now. Since then, their teamwork can be heard on Bilal's "Sirens II" and the original soundtrack for Netflix series Luke Cage. Their musical magic was also featured on Kendrick Lamar's surprise 2016 project untitled unmastered. The track, known simply as “untitled 06 | 06.30.2014,” was built upon a Muhammad/Younge sample with guest vocals from CeeLo Green.

The sample is now a fully completed song entitled "Questions" and serves as our first listen of the awesomeness that awaits on The Midnight Hour. A delightful undercurrent of bossa nova runs through the jazzy slice of soul, lushly backed by a full orchestra and crisp beats. CeeLo's fluid vocals float over the layered arrangement, enchanting us as he hums and sings an ode to his enigmatic personality. Lines like, "Both sides of me are evenly odd," "Am I mortal man, or make believe?" and "I'm supernatural, I am strange." sound autobiographical, indeed, making the song even more appealing.

In addition to CeeLo, the album will also feature appearances by Bilal, Raphael Saadiq, Marsha Ambrosius, Questlove, Eryn Allen Kane, Ladybug Mecca, Keyon Harrold and the late Luther Vandross. Five years in the making, the duo recently revealed to Rolling Stone, "It is a joy to create The Midnight Hour with our friends who were willing to take the musical journey with us to make something special that is a departure from the status quo. The Midnight Hour represents the black idiom in regards to jazz, hip hop and cinematic soul for a new generation."

Listen to "Questions" below and prepare to get caught up in The Midnight Hour when it drops on June 8th. Peep the tracklist below and pre-order ahead of the release date. Also, listen out for Ali and Adrian's newest Luke Cage score when Season 2 premieres on Netflix on June 22nd. On a related note, Raphael Saadiq recently announced that Ali Shaheed will be joining his Ray Ray Vs. Charlie Ray Tour this July. Grab your tickets before it's too late, then catch the Lucy Pearl bandmates talk music and life on Microphone Check, Muhammad's podcast with journalist Frannie Kelley.