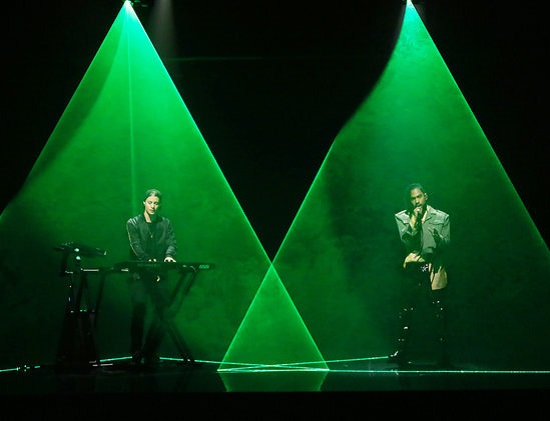 Miguel has been on a promotional roll as of late, seemingly hitting any place that will allow him to perform. Recently, he came through The Tonight Show Starring Jimmy Fallon to offer a live rendition of his single "Come Through And Chill." The singer found himself back on that very same stage last night with his collaborator Kygo to perform their hit song "Remind Me To Forget."

The power pop number has been burning up charts since its March release and this performance is sure to make it even more popular. The two took to opposite sides of the stage, Miguel behind his mic and Kygo behind a keyboard and equipment, to deliver the tune. While things seemed pretty straightforward at first, the audience soon realized that this wasn't the typical performance. Perhaps taking a cue from Childish Gambino's performance of "This Is America" on Saturday Night Live, they were soon drenched in flashing laser lights. The display was quite remarkable, forming various shapes and patterns as the strobing lights washed over each performer throughout the course of the song's duration. The decision to keep the two performers spaced apart on the stage created an interesting dynamic that definitely made for good watching both for the live audience and those of us watching at home.

If you're ready for a visual treat, feast your eyes on Kygo and Miguel's electrifying performance below.