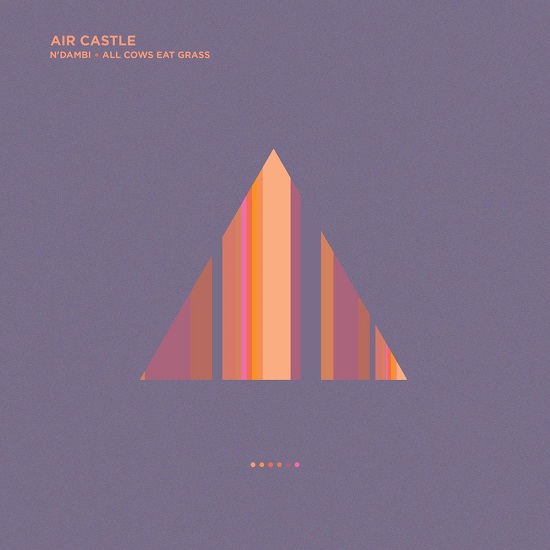 Almost a decade after her last album release, jazzy soulstress N'Dambi has returned in the most unexpected way – joining forces with All Cows Eat Grass for an otherworldly project called Air Castle. Appropriately described as "a sonic journey through space and time," the 5-track EP is an immersive listening experience with each song pushing us deeper into the enchanting realms of their musical cosmos.

While each song is distinctive, the cohesive feel is a testament to the chemistry of N'Dambi and ACEG frontman T. Brown, co-writers of the entire project. Setting the tone for this dope collection of sounds is lead single "Nowhere." At one point, N'Dambi sings, "C'mon now don't you fight it, just let me take you high," signaling that we're about to embark on an aural journey unfettered by the trappings of fleeting musical trends. Vulnerable, yet resilient, "Just a Man" showcases her R&B roots as she emotionally sings about an absent father.

Title track "Air Castle" is a hypnotically funky, electro-soul hybrid that highlights T. Brown's ingenious production as well as his vocals. The spacey track takes us even higher courtesy of Jeff Gitelman's rocket-fueled guitar solo. Breezy groove "Show Me Your Smile" is sweetly endearing without feeling syrupy. Meanwhile album closer "Borrowed Time" reminds us to make the most of our mortality and live life to the fullest. By the way, T. Brown isn't the only Wondaland alum present on the album. That intergalactic guitar you hear on each song (except the title track) is none other than Kellindo Parker.

What makes Air Castle such a standout is that it embraces retro sounds, yet sounds totally futuristic because there's nothing else like it. Stream the album below then support good music buy purchasing a copy to add to your collection. We're hoping that this partnership never ends and keeping our fingers crossed that a video (or two, or three) will drop in the near future. In the meantime, head to Twitter for updates from both N'Dambi and All Cows Eat Grass.