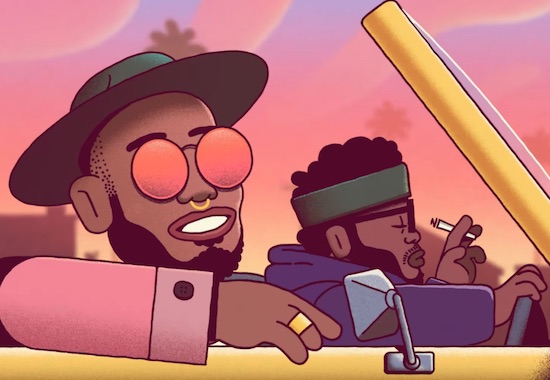 It's Anderson .Paak season! The multi-talented SoulBounce fave is gearing up for his next album, and we are basking in the glory of his poppin' new song and music video for "Bubblin'." But that's not the only thing that Paak dropped this week. He is still getting some mileage out of his NxWorries side project alongside Knxwledge with the surprise release of a music video for their track "Lyk Dis."

"Lyk Dis" is a risque little ditty that they dropped as the first single from their debut album Yes Lawd! in 2016. However, true NxWorries fans know that the song first surfaced at the tail end of the "Suede" music video in 2015. "Lyk Dis" might be just shy of three years old, but there's no expiration date on good music and we're glad that it's experiencing a revival with this animated visual. Illustrator Robin Velghe and animator Andy Baker create a whimsical and colorful version of Los Angeles for Anderson and Knxwledge to flirt and floss their way around. The clip begins during the aftermath of what looks like a wild pool party. Paak is seen luxuriating in the pool on a float while Knxwledge is inside tinkering away on a beat machine. Anderson has a flashback to the night before and remembers that a PYT slipped him a piece of paper before she left. He locates her note in his jacket and unfolds it to find a rudimentary map to her house. Andy grabs Knxwledge and they ride out in a yellow convertible to find old girl. Along the way, they encounter some women in seemingly suggestive but totally innocent situations and drive a little reckless. They go through a tunnel and arrive at an overlook where they have a surprising view of the city in front of them.

For such a sexually-explicit song, the animated music video is very Saturday morning cartoonish, but the lyrical content is far from kid-friendly, so parents beware. Although the visual isn't the slick and sexy affair we envisioned for this track, we do appreciate the nod to the "Lyk Dis" segment of the "Suede" video with Knxwledge driving and Anderson riding shotgun and talking his ish recreated here in animated fashion. It's cute, entertaining and worth the less-than-three-minute time investment after you press play.