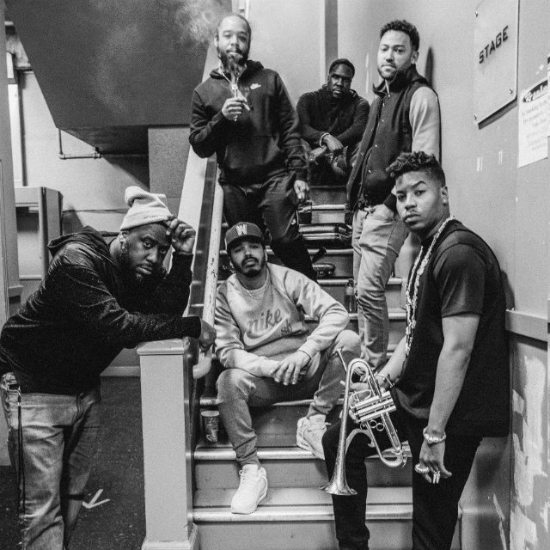 At the end of 2017, Robert Glasper announced the union of a new musical force R+R=NOW. Now that we're well into 2018, Glasper – alongside his bandmates multi-instrumentalist and producer Terrace Martin, jazz trumpeter Christian Scott aTunde Adjuah, bassist Derrick Hodge, drummer Justin Tyson and multi-instrumentalist Taylor McFerrin – is prepping us for the release of the collective's debut album, Collagically Speaking. They've released two songs to get us ready for the 11-track album, which is a jazzy symphony of soul and hip-hop that debuts in June.

For the first single "Change Of Tone," the band gives us a mid-tempo groove, which takes us on a trip from pure jazz to R&B and chill soul. It's a seven-minute vibe you'll want to put on repeat, with highlights including Terrace's computerized vocals, Glasper's signature keys and Christian's horn flourishes. Their second release, "Colors In The Dark," paints a similar albeit shorter picture with a soothing instrumental to vibe out to. The two easy, breezy tracks provide a satisfying sample of what we can expect on the supergroup's debut, and we're excited to hear more.

Collagically Speaking also promises guest appearances from actors Omari Hardwick and Terry Crews, actress Amanda Seales, rappers Stalley and yasiin bey and singers Amber Navran (of Moonchild) and Goapele. If you want to catch R+R=NOW live, they'll be doing some album release shows in Atlanta, D.C. and Brooklyn before embarking on a summer tour that will take them across Europe and Japan. Listen to "Change Of Tone" and "Colors In The Dark" right here, and be sure to pre-order Collagically Speaking after you watch the album teaser video below.