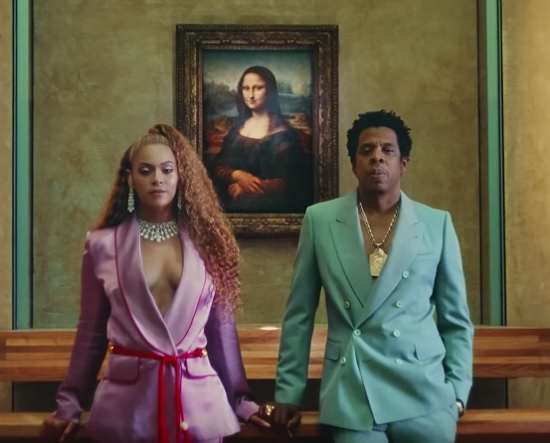 Leave it to The Carters — Beyoncé and JAY-Z — pretty much have no chill when it comes to releasing new projects. Most of the world was going about its business preparing the next day's Father's Day celebrations when, out of nowhere, the biggest couple in music today dropped their joint album Everything Is Love. And, of course, the internet went nuts. Or should we say "APES**T," which happens to be the name of the first video from the collection that dropped simultaneously with the album's release.

Let the internet tell it, Everything Is Love is an instant classic. We won't jump that far just yet, but it is an example of just how well The Carters work together. They tag team on tracks as Beyoncé spits more of the hot fire we heard on their DJ Khaled collaboration "Top Off" earlier this year. They go in over the set's nine songs (10 if you count bonus track "SALUD!") throwing the middle finger up to everyone from Kanye West to Spotify on all-caps tracks like "SUMMER," "BOSS," "FRIENDS," "HEARD ABOUT US" and "LOVEHAPPY."

For the "APES**T" video, the couple takes over the Louvre because of course they do. Bringing a bit of melanin and everyday blackness to the world-renowned museum, the couple get a completely unobstructed view of the Mona Lisa and bring their crew of dancers into the museum's hallowed halls to do everything from krump to braid hair. Jay and Bey mug throughout the six-minute clip as Beyoncé snaps on the track, which sounds like it was cribbed straight from Migos and Young Thug (the former actually provides the ad-libs for the track). Jigga fans need not worry though, as Jay does show up to drop a few shots about the GRAMMYs and the Super Bowl before Bey takes over the show once again.

Of course, since this is Bey and Jay we're talking about, Everything Is Love was released as a TIDAL exclusive. Now, however, The Carters have granted access to fans who are subscribers to TIDAL and Spotify (if you're a user of Spotify's free version, you're S.O.L. until next month). TIDAL users can enjoy the album (and probably have) here and Spotify subscribers can partake here. For the rest of us, they've been gracious enough to not put the video for "APES**T" behind a TIDAL paywall, instead dropping it straight to YouTube. Check it out below.