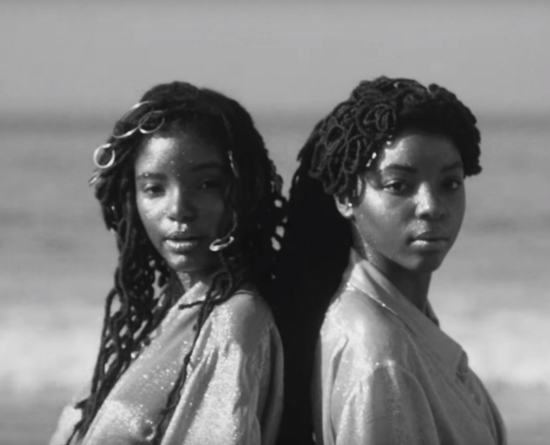 Breaking up is hard to do. It's even harder when your newly-annointed ex seems to be flourishing and moving without you. Sanging sisters Chloe x Halle capture those emotions perfectly with their latest single and video, "Happy Without Me."

The clip features the shimmery glitter-dipped duo in all of their celestial glory as they reminisce on the good times with their formers before admitting that it breaks their heart to see them move on to the next while they nurse their wounded hearts. Despite the underlying sentiments of the song's lyrics like "And it breaks my heart to see you happy without me," the video itself paints a picture of ultimate freedom as the two dance freely around on the beach. Actor Ashton Sanders, who featured in Chloe x Halle's previous video for "The Kids Are Alright,"  appears once again, this time as a fallen angel complete with a set of wings and a mouth full of golds. He lounges around languidly, at times appearing to symbolize the demise of love, and at others to symbolize the hope that accompanies a new beginning.

While rapper Joey Bada$$ does not appear in the video, his verse is brought to life with shots of Sanders staring moodily into the camera. He responds to the pain inflicted upon his former love, admitting that even though he has moved on, he also wants that old thang back and often reflects on what went wrong.

"Happy Without Me" is the latest single to come from the duo's debut album, The Kids Are Alright. The release also comes on the heels of their simmering performance at this year's MTV Music Video Awards and ahead of their opening slot on the U.S. leg of Beyoncé and JAY-Z's On the Run II Tour. Peep the visuals for this complex look at the end of a relationship and the process of moving on.


TAGS:  ashton sanders, beyoncé, Chloe Bailey, Chloe x Halle, Halle Bailey, jay-z, Joey Bada$$"
Previous: VanJess Has Us ‘Addicted’ To Their ‘COLORS’ Performance Next: Mamas Gun Goes Out ‘On The Wire’ To Get Their Message Across