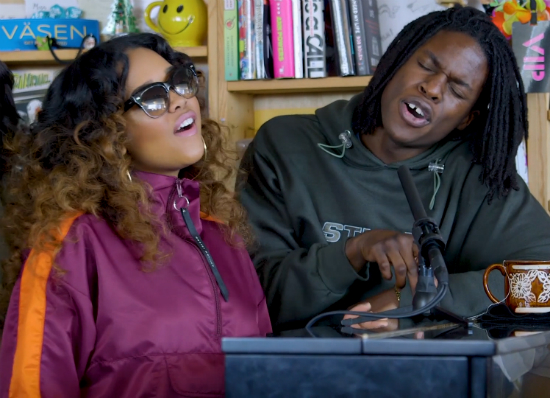 After treating Washington, D.C. to a harmony-filled performance at the 2018 Broccoli City Music Festival, Daniel Caesar made sure to stop by NPR's headquarters to give employees and guests a more intimate dose of his talent. The 23-year-old crooner, along with his band and trio of background singers took over NPR Music's Tiny Desk Concert Series and transported the audience into his soulful world. The performance got even sweeter when H.E.R. joined Daniel for their collaboration "Best Part." Before we got to the dynamic duo, fans packed into the NPR office, standing between cubicles just to get a glimpse of the magic that was bound to happen when Caesar and co. started performing.

Daniel kicked off his 16-minute gig with "Japanese Denim" from his 2016 EP Get You. Performing mostly with his eyes closed, the singer didn't hold back with his powerhouse vocals. Throughout his performance, Daniel got a welcome assist from his supporting vocalists Camille Harrison, Danah Martin and Nevon Sinclair, whose harmonies could lull anyone into a peaceful place. After captivating all attendees, Daniel then performed his hit single "Get You" from his album Freudian. He added an extra layer of soul with strategically placed background support behind his signature coo-ing as the band skillfully followed along.

Daniel's Tiny Deck Concert ended with the best part, when he invited H.E.R. to join him behind Bob Boilen's desk. What ensued was a choir of ridiculously beautiful vocals, new arrangements and ad-libs that made our hearts melt. If their content faces and smirks were any indication of how things were going, we'd say they went pretty damn good. The duo, along with the background vocalists and band ended with a perfectly arranged a cappella version of "Best Part" we would love to see released as a bonus track one day. Daniel himself was grooving throughout the performance and looked impressed by the time the song was over.

You'll want to watch Daniel Caesar's stellar Tiny Desk Concert again and again, so go ahead and clear your schedule and get comfortable before you press play.