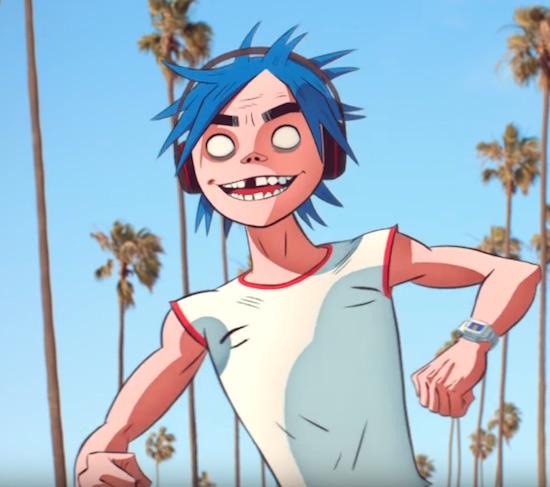 After a brief hiatus, Gorillaz are back like they never left. Not only is the group back with another new album entitled The Now Now on the horizon, but they added a new member, Ace into the flock. If you’ve been keeping up with the band’s ongoing fictional storyline, original fourth member Murdoc was recently incarcerated. Eagle-eyed fans might recognize Ace as a member of the Gangreen Gang, from a little show called The Powerpuff Girls. No matter the changes, the group hasn’t missed a step or a beat, getting us prepared for their new LP with two new tracks, “Humility” and “Lake Zurich.”

“Humility,” featuring jazz and R&B legend George Benson, is a track about getting out and enjoying life. Against a tranquil sound bed, frontman Damon Albarn sings about forsaking loneliness and isolation for new adventures. Albarn describes “Humility” as a “summer record.” Such a feel-good summer record deserves an equally fun and carefree video. Directed by The Gorillaz co-creator and illustrator Jamie Hewlett, the clip shows the group enjoying a sunny day along Venice Beach. We see singer 2D roller skating while wearing a pair of Beats headphones, Noodle playing chess and new member Ace causing trouble on the basketball court. Oh! And there’s an extra special guest appearance by actor Jack Black who may as well be an animated character, too.

Still on that chill vibe but a little more uptempo is their other single “Lake Zurich.”  The midtempo record that blends '70s and '80s sounds into an electro funky mix. Mostly an instrumental except for some inaudible talking about a minute in and a few modulated harmonies in the bridge, the track is made for doing a few light two-steps to in the club.

“Humility” and “Lake Zurich” will be featured on Gorillaz's upcoming sixth album, The Now Now, dropping on June 29th. The project follows their 2017 release, Humanz, and features additional appearances from Snoop Dogg and Jamie Principle. While you wait for the whole shebang, peep the "Humility" video and "Lake Zurich" visualizer along with The Now Now tracklist right here.