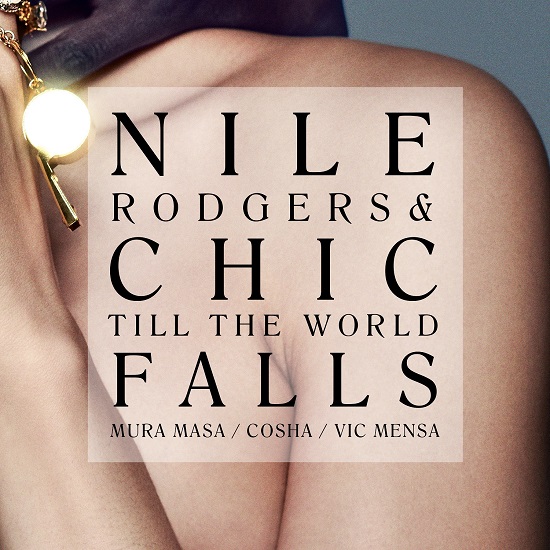 Remember when Daft Punk's "Get Lucky" spawned talk of a disco resurgence? Well, while no one is necessarily digging out their bell bottoms and leisure suits, the song did spark a career revival for Chic guitarist Nile Rodgers. In fact, he reformed his original band, now called Nile Rodgers & Chic, and now the collective is ready to unleash their first album in 25 years, It's About Time, this September. Ahead of the project dropping, they've released the new disco-fied single "Till The World Falls" and even premiered another song, "Boogie All Night," on Later...With Jools Holland.

"Till The World Falls" is pure Chic, with Nile's signature rhythm guitar riffs calling us to the disco along with an assist from producer Mura Masa, who helps conjure up sounds that bring us back to illuminated dance floors. Meanwhile, singer Cosha channels her inner disco diva as she coos and calls us to shake our bodies to the infectious rhythm. Also along the ride to spice things up is Vic Mensa, who drops a hot 16 near the song's end to give the song a bit of hip-hop flair (and, if you listen closely, you'll also hear a few ad-libs tossed in from Anderson .Paak) to keep things in the here and now.

In addition to the official lead single, the crew recently appeared on British late night talk show Later...With Jools Holland to perform the track live with Cosha and Mura Masa to shake it down on the stage. The live rendition kept the same energy as the single, even without Vic there to add his coda to the mix. They were also joined by British singer NAO for another brand new track "Boogie All Night." Like "Till The World Falls," "Boogie All Night" definitely channels the disco '70s (with Nile's guitar riffs, how can it not?). However, the arrangement and NAO's chirpy vocal also makes things feel a bit like the boogie sound of the early '80s. That being said, NAO fit right in with the band as she swung her hair and grooved with them, proving that good music knows no genre or era.

Check out the Spotify stream of "Till The World Falls" below and stick around to watch Nile Rodgers & Chic perform that and "Boogie All Night" live below.