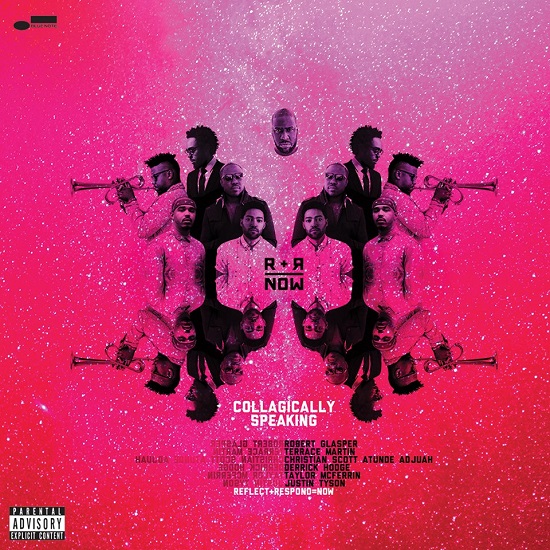 When we first learned that Robert Glasper had formed a musical Voltron with his supergroup R+R=NOW, we couldn't wait to hear what the combination of Glasper, Terrace Martin, Christian Scott aTunde Adjuah, Derrick Hodge, Taylor McFerrin and Justin Tyson would sound like on a full album. Now, that album — Collagically Speaking — is here and it seems to be everything we've hoped for.

Our first introductions to the collective were the tracks "Change Of Tone" and "Colors In The Dark," but there are plenty of other gems to be found on the album. The 11-song collection is full of songs showing the daring jazz fusion that is the result of the collective coming together, with songs like "By Design" and "Resting Warrior" taking us to places unexpected and surprising. Speaking of which, after seeing the actor-heavy list of guests, we wondered how they'd be incorporated in the mix. For the most part, guests like Omari Hardwick ("Needed You Still"), Terry Crews ("The Night In Question") and Amanda Seales ("HER=NOW") add spoken word codas to imaginative instrumentals, giving extra context and heft to songs already heavy with mood and meaning. On the more traditional feature front, rapper Stalley drops bars on "Reflect Reprise" as the crew whips up a hip-hop joint filtered through jazz and electronic influences that give it a brand new feel. Moonchild's Amber Navran also makes a memorable contribution with the final song "Been On My Mind." The wistfully seductive track is perhaps one of the best moments on the album, adapting a bit of McFerrin's signature broken beat sound and fusing it with Glasper's smooth keys to create something that — as the song's title suggests — stays with you long after the album is done.

We didn't know what exactly we'd be getting with R+R=NOW, but with this major of a lineup, we knew it'd be amazing. We're more than happy that Collagically Speaking lives up to our expectations and surpasses them. You can stream the project in full below.