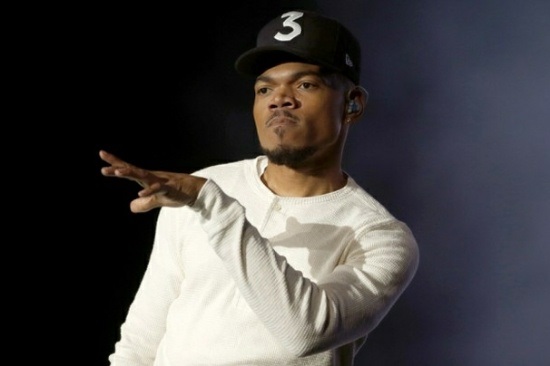 Chance the Rapper has garnered critical acclaim thanks in part to his underlying message of love mixed with a healthy dose of Christianity and his happy-go-lucky demeanor. Fans get to see a much different side of the Chicago artist on his latest batch of songs, which dropped late Wednesday. On the four songs released via his SoundCloud, he takes direct aim at Windy City Mayor Rahm Emmanuel and announces a surprising new business venture.

After announcing that he would be releasing a new album, he walked it back on Twitter, instead releasing "I Might Need Security," "Work Out," "Wala Cam" and "65th & Ingleside." On the opener, he sheds his congenial image as he rhymes over a sped-up sample of Jamie Foxx singing a very non-PG-13 directive. He is filled with swag and confidence as he casually lets Emmanuel know that he'll be patiently awaiting his resignation.

Chance's beef with the politician isn't the only big news to come from the song. He also uses the song to announce the news that he recently entered the media game with his purchase of the Chicagoist.com, a local news platform that has been dormant since the previous owner shuttered the site along with Gothamist, DNAinfo and more when the employees voted to unionize. "I bought the Chicagoist just to run you racist b*****s out of business," he rhymes.

In a statement, Chance expressed his excitement at being able to revive the news site. "I'm extremely excited to be continuing the work of the Chicagoist, an integral local platform for Chicago news, events and entertainment. I look forward to relaunching it and bringing the people of Chicago an independent media outlet focused on amplifying diverse voices and content," he said. The website will be operated through Chance's recently formed company Social Media, which seeks to promote local investigative journalism, diversity and representation for people of color in media.

"Work Out" finds him more in line with the sound of 2016's Coloring Book, wishing the best for his ex-girlfriends (only after jokingly taking shots at one) and celebrating his daughter. "Wala Cam" is the only song to feature guest appearances with Super Bwe and Forever Band showing up on the juke-influenced bop. Chance wraps things up "65th & Ingleside" in which he pays homage to his fiancée for riding with him long before the success.

While it may not be the full album that fans had been hoping for, these four new songs go a long way with satisfying our cravings for Chance the Rapper. Knowing that the 25-year-old is also forging new territory with social media and his acquisition of the Chicagoist's website is proof positive that this young talent is full of surprises.