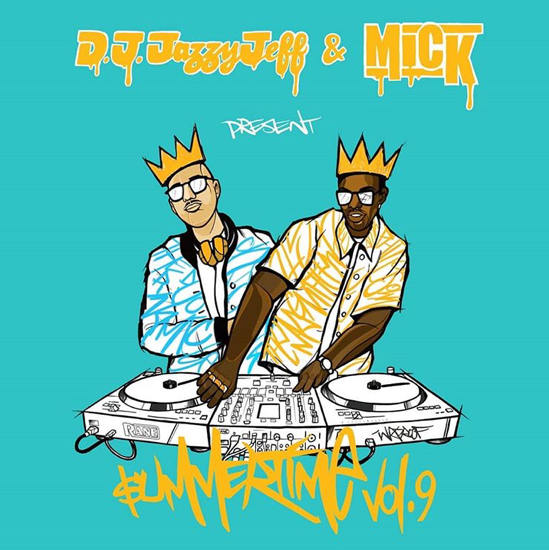 Cookout season is officially upon us. Besides the actual food on the menu, music is probably the second most important part of a successful cookout, because nothing ruins the fun faster than a terrible soundtrack. Well, for the ninth year in a row, DJ Jazzy Jeff and Mick are here to save your cookouts, get-togethers, functions and kickbacks from bad music with the release of their Summertime Vol. 9 mixtape.

Things kick off with as they always do with an exclusive, unreleased track to get the party started. This year's exclusive features Rhymefest putting his spin on the Jazzy Jeff & The Fresh Prince's 1991 classic single, "Summertime." From that point on, its a non-stop party for the next hour and some change as Jeff and Mick (formerly known as Mick Boogie) breeze through tried-and-true party starters by the likes of Amerie, Michael Jackson, The Jackson 5, OutKast, T.I., Q-Tip, Arrested Development, Slick Rick, Jean Carne and Justin Timberlake.

The blend of hip-hop, soul, disco, funk and jazz transitions seamlessly, each song bringing an entirely new vibe to the mixtape while giving a nod to both the past and present that music has to offer. This fun and light-hearted mix does the heavy-lifting for anybody looking to keep the good vibes flowing during his/her next shindig. The best part about Summertime Vol. 9 is that it is versatile, possessing the ability to not only kickstart fun but also to serve as the soundtrack for a day (or night)  just lounging around the house. No matter what purpose you plan on using DJ Jazzy Jeff and Mick's latest collabo, one thing is for certain — there's absolutely no way you can lose with this lively party-rocking blend.