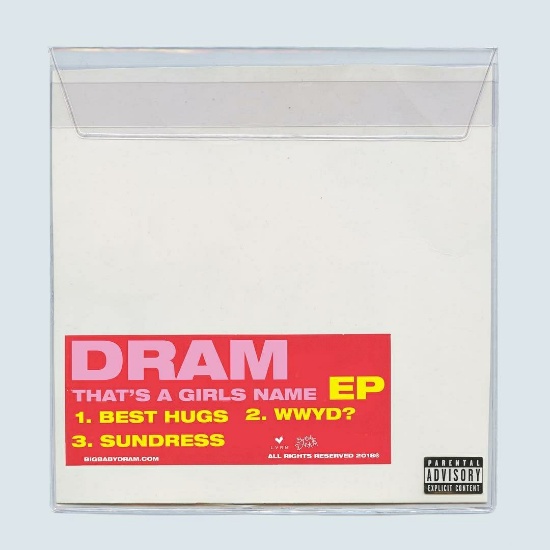 Big Baby DRAM, standing for Does Real Ass Music, made a big splash in 2014 with his single, “Cha Cha,” a fun, light-hearted track that had everyone bopping in the club, no matter how silly you thought it was. Then he surprised us with his sophomore long player that had not only some fly club singles but album tracks that had substance, style and humor. His unique musical stylings had us buzzing and we couldn’t deny the Virginia-native had the sauce. Now he’s surprised fans by releasing a three-track EP, That’s a Girls Name.

The project opens with the midtempo “Best Hugs.” On the track, DRAM delivers a warning to a dude, letting a fellow gentleman know that the girl on his arms could be his if he isn’t careful. The second track is “WWYD." Over a sample of Dynasty’s “Adventures in the Land of Music,” popularized by Camp Lo’s hit single “Luchini (This Is It),” DRAM questions whether money equals happiness. Would it solve your problems or expose the truth behind them? An introspective track, he discusses his own experience with going from nothing to something. The project ends with the funk-rock flavored, “Sundress.” Dropping corny yet charming lines like, “Your heart is humble, but yo body is braggin’,” DRAM pays homage to the Black woman’s official outfit of summer cookouts, concerts and all gatherings in-between.

That’s a Girls Name is DRAM’s first new project since his Christmas EP, #1HappyHoliday. He’s also shared collaborations with everyone from Diplo to Neil Young. We should expect a new full-length album from the impresario sometime this year. In the meantime, this three-song EP should be enough to get us through the second half of the summer.