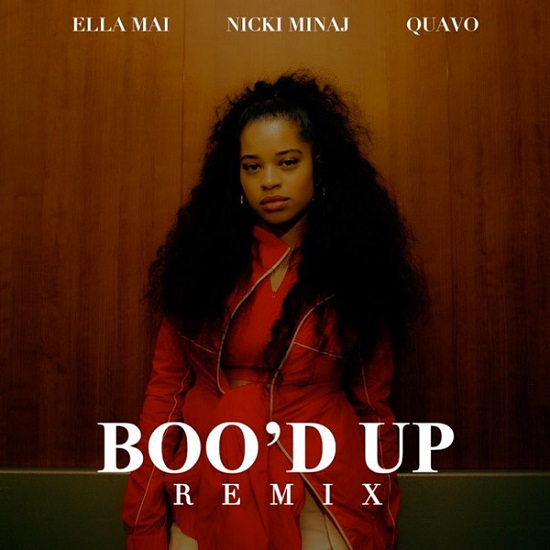 The contest for song of the summer is officially on and poppin'. However, this year's song of the summer contest might already have a queen at its throne: Ella Mai. The British songstress' '90s R&B-esque jam "Boo'd Up" is burning up the charts and bumping out of all the jeeps it seems (hell, she's even landed a headlining tour without an album out), so it's no surprise that some of the hottest names in the game want to add their own spin to the summer smash. While there are a few unofficial joints floating around out there, the official remix to the track finds Ella linking up with hip-hop heavyweights Nicki Minaj and Migos member Quavo.

While no one necessarily asked for a remix, especially one with the two rappers on it, we can't be mad that they attempted to capitalize on the song's success. We just wish that the rappers' verses actually added to the track. Nicki opens the track, giving her usual Nicki-isms. She wastes no time referencing her own work and performing her usual name drops and sound effects. Thankfully her verse is mercifully short and we jump straight into Ella's verse the song's head-nodding groove. Just as we're enjoying things, though, here comes Quavo with an unnecessarily Auto-Tuned sixteen that puts the "forget" in "forgettable." It's enough to make you wonder if either guest rapper took the time to actually listen to the song they were rapping on.

While we're all about Ella Mai's current glow up, "Boo'd Up" deserved better than this half-baked remix. Here's hoping they retool this with guests who actually fit the song's groove or — better yet — just leave the song alone altogether. That being said, check out the official "Boo'd Up" remix for yourself and then let us know who you'd really like to hear on a remix to the jam.