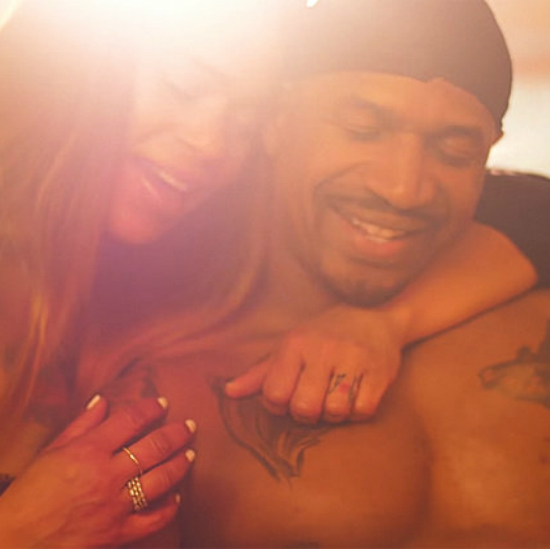 Not since Whitney Houston and Bobby Brown has such a seemingly mismatched celebrity couple shocked fans and stolen headlines. But Faith Evans and the infamous Stevie J have managed to do just that after they got hitched to everyone’s surprise. The two have a past together, meeting as a singer and producer respectively on Puff Daddy’s Bad Boy Records in the '90s. Since then, the two have had infamous love affairs and become reality stars. Reported by TMZ, it was announced that the couple filed for a marriage license in Las Vegas, NV. Because, where else would they get married? Faith confirmed that Stevie put a ring on it via Twitter, simply stating, “Love wins.” Not to be outdone, Stevie got a face tatt of Ms. Evans' name. Further confirming their love, or possibly doing too much and not enough at the same damn time to prove this isn’t just another stunt, the two have released a duet entitled “A Minute” and a NSFW music video. Not quite Whitney and Bobby’s “We Got Something In Common,” the slow jam is complimented by a raunchy peek into the duo’s boudoir.

“Falling in love with you didn’t even take a minute,” coo the newlyweds over '90s-esque production. A sly reference to their seemingly impromptu nuptials, the lyrics hint at their shared past and their public relationship. While we’re not used to hearing Mr. Jordan sing, he knows how to flow over his own production pretty well. Meanwhile, Faith barely breaks a sweat, blessing the track with her heavenly harmonies. Part of the lyrics even take some slight inspiration from Mother’s Finest 1978 hit, “Love Changes,” with the infamous, “Love will make you oh so happy / Inside (ha, ha, ha). The infamous line that hints on the sweet yet naughty joy that comes with lovemaking, it’s actually a perfect way to describe the couple.

Speaking of being naughty, the video for the new song doesn’t shy away from showing Evans and Jordan in all their softcore glory. Directed by Derek Blanks, the clip shows the newlyweds getting it on. And the couple does it everywhere and anywhere from the bed to the shower to the kitchen table. In between steamy bedroom scenes, we also see shots of the couple spending time away from each other. Stevie is with his boys making it rain in the strip club, while Faith is chilling with her girls having a night out. However, they’re still on each other’s minds. The clip ends with the couple kissing in front of a group of friends before the scene fades to black and we’re left with the ever mysterious phrase “to be continued.”

So, what’s comes next? We’re not quite sure what the happy couple has planned, whether it’s a full album or a reality show. In either case, we’ll be keeping our eyes and ears open for further antics and escapades from Mr. and Mrs. Jordan.