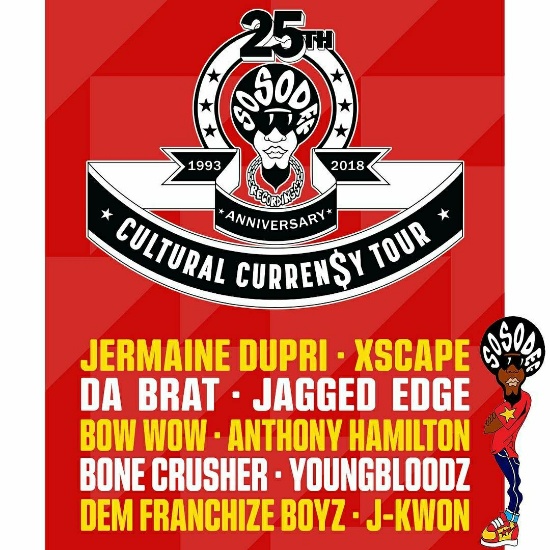 Jermaine Dupri is the genius behind many a successful career and has etched his name in music history. The Hall of Fame Songwriter, producer, recording artist and reality TV star has brought the likes of Xscape, Da Brat, Jagged Edge, Bow Wow and more to fame, and now he's reuniting them all on stage to celebrate So So Def's 25th anniversary. Dupri just announced the Cultural Curren$y Tour, featuring exclusive performances from the very artists whose careers he catapulted to new heights.

Also joining the tour are Anthony Hamilton, Youngbloodz, Bone Crusher, J-Kwon and Dem Franchize Boyz. All these artists plan to do it culture when the tour kicks off October 14th in Washington, D.C. and wraps up November 2nd in Los Angeles. On Instagram, Dupri commented on the tour, stating "Blessing are bigger when you share them. One of my biggest blessings is to be able to go tour with all my artists. I can't wait!!!"

With hits for days under the Atlanta-based label's belt, Dupri just released a compilation album for your listening convenience and pleasure. Jermaine Dupri Presents So So Def 25, includes hits like Da Brat's "Funkdafied," Xscape's  "Just Kickin’ It," Jagged Edge's "Where The Party At," Dupri and Jay-Z's "Money Ain't A Thing" and rare tracks from Kanye West, Aaliyah and Notorious B.I.G.

With a roster like this and a compilation album to prime your decision-making, you'll probably want to get your tickets pretty soon, especially since they go on sale Friday, August 3rd on Ticketmaster. Fans who purchase the compilation album get access to a pre-sale running from 10 a.m. August 1st through 10 p.m. August 2nd. You can stream the album right here, and let Dupri know if you're so so excited when you visit the So So Def website to join in their social media celebration.