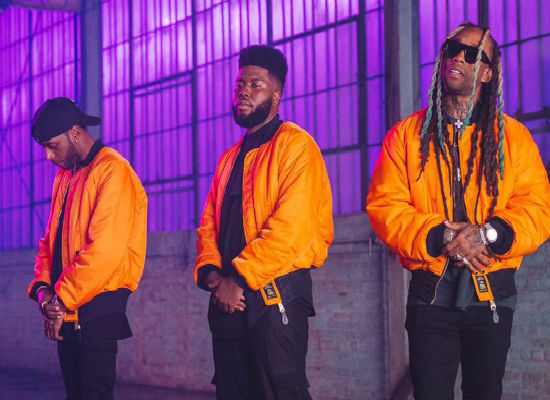 In 1978, British New Wave band The Buggles proclaimed that “Video Killed the Radio Star.” These days, clearly that is not the case, as music videos are few and far between given that programs like Video Soul and the Video Jukebox network are long gone. However, for his pull-up jam “OTW” featuring 6LACK and Ty Dolla $ign, Khalid throws it back to the '90s when videos reigned supreme. Though the 20-year-old singer/songwriter needs no help reaching his fans, it’s nice to see this new school of artists pay homage to those that came before them.

The Calmatic-directed clip features all the things we loved about the '90s, including the colorful clothing, boxy television set and Kodak cameras. Everything from the talented trio's matching attire to their coordinated movements are N*SYNC as they perform in a staged alley way, very reminiscent of videos from your favorite R&B groups back in the day. We take a trip down memory lane as we catch glimpses of teenage girls singing and dancing along to the video in a bedroom as they get ready for a night out. Eventually, the ladies and the fellas all meet up for a block party among shiny Jeeps and lowriders, making the visual a masterful capture of summer nights about 20 years or so ago.

Check out Khalid’s nod to nostalgia and watch his video for “OTW” featuring 6LACK and Ty Dolla $ign below. Khalid is on a roll and this latest release proves he has no intention of stopping. A constant staple on the music festival circuit, his Roxy Tour made the list of top-grossing tours this year and now the five-time GRAMMY nominee has a string of European festival appearances lined up. Check out his tour dates here, and Bouncers across the pond can catch him at classic events like Belgium's Rock Werchter on July 7th, the sold-out British Summer Time festival in London's Hyde Park on July 14th and the North Sea Jazz festival in Rotterdam on July 15th.


TAGS:  6lack, Khalid, the buggles, Ty Dolla $ign
Previous: Ella Mai Gets ‘Boo’d Up’ With Quavo & Nicki Minaj For A Remix Next: Love’s Got Leon Thomas In The ‘Sunken Place’