Catch A Groove With The Internet In ‘La Di Da’ 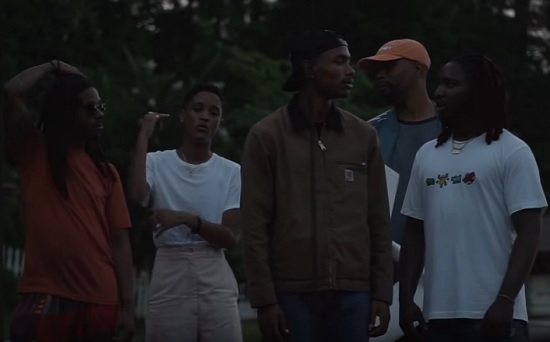 The Internet has gone and did it again. Hive Mind is another worthy addition to their catalog, with funky jams and seductive slow joints that get your attention and keep it there. Of course, they've also been bringing it in the visual department as well, delivering quality clips for the set's initial singles "Roll (Burbank Funk)" and "Come Over." The quality continues with the clip for their jam "La Di Da."

After Syd made her directorial debut with "Come Over," it's now Matt Martians' turn to direct the crew. He does so by capturing the group in their element while out in the elements. The majority of the clip captures them goofing around while enjoying a day out in nature at the park. They party by the lake, do cartwheels, act a fool indoors and even ride around in the bed of a pickup truck. There's no overarching storyline to be found here, though. Just like the song, it's all about catching a groove and enjoying life. Don't let the lo-fi footage fool you, though. There's still a music video happening here. They bring it back to the usual with a closeup of Matt as his smooth talks his way into the song's bridge. From there, the group jams out as each is bathed in their own personal colored spotlight as the song fades. Then we get an up-close shot of Syd as she sings part of another Hive Mind track "Wanna Be" before the lights fade low and it all ends.

Though it might be the simplest of the bunch, this clip is hands down the most fun. Get into The Internet's jam by peeping "La Di Da" below and then make sure you pick up a copy of Hive Mind right after.