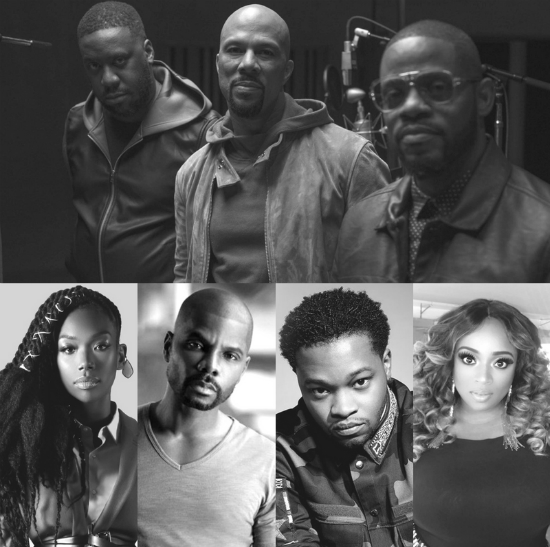 Common, Robert Glasper and Karriem Riggins' supergroup August Greene are giving us positive vibes to close out a pretty rough week. The trio collaborated with songstress Brandy for their debut track "Optimistic," and now they're releasing an official remix. Meant to uplift, August Greene added an extra dose of inspiration with the help of Kirk Franklin, BJ The Chicago Kid and Kierra Sheard. For the remix, they veer away from their Sounds of Blackness cover and focus on a new groove with less keys, more bass and even more vocals.

In the remix, Kirk Franklin serves as the optimistic hype man, reminding us that "weeping may endure for a night but joy does comes in the morning." Over a laid-back beat, Brandy's vocals chime in with the first verse as we bop our heads along to the mid-tempo track. The single moves into a harmony-filled bridge, with syrupy sweet vocals from Brandy and Kierra. They pass the vocal baton over to BJ The Chicago Kid, who brings an extra layer of soul, elevating the track to new heights. Common lays down his skilled verse, and Kirk comes back to give you an extra helping of inspiration. Kierra closes out the remix with her infectious vocal tone, breathing life into the end of the five-minute track.

Earlier this week, the group performed "No Apologies" on The Tonight Show Starring Jimmy Fallon, and today they're releasing their self-titled album on vinyl, which you can cop over on Amazon. If you want to hear the magic that is August Greene live, you can catch them on tour next in Paris at Le Trianon on September 7th and at Atlanta's ONE Musicfest on September 9th. Listen to "Optimistic: The Remix" right here and keep your head up to the sky while you're at it.