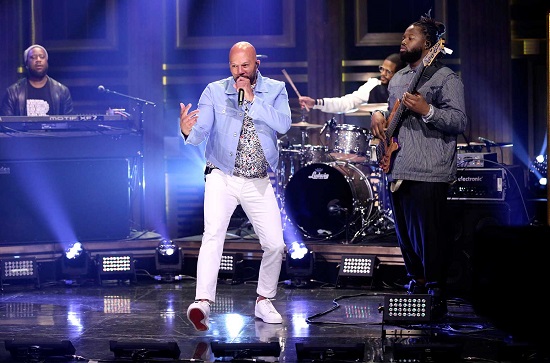 Supergroup August Greene blessed us earlier this year with their self-titled debut album. It's one of the year's best releases thus far, with the melding of jazz, hip-hop and soul creating quite the sonic experience. However, when it comes to a collective combining the talents of Common, Robert Glasper and Karriem Riggins, you already know that you have to see them do their thing live. We've already been granted a taste of the experience with their appearance at NPR Music's Tiny Desk Concert series and their appearance on Late Night With Seth Meyers. Now we've got another with their appearance last night on The Tonight Show Starring Jimmy Fallon.

The crew performed their explosive track "No Apologies" for the in-studio audience, showing off jazzy hip-hop sensibility with Com's blistering flows over a free jazz rhythm. The experience was an intense one as the crew opted for little of the set dressing many other artists go for on the program. This created a focus on the talents of the trio, their guest bass player and the backing singers-turned-hype men, who spit with Com on the chorus. Common demanded the most attention, though, with his colorful attire and bouncy movements across the small stage making anyone who watched take notice as he asked us to follow him on this particular musical journey.

This live showing was perhaps one of the most lively we've seen from August Greene on television, though we're sure that there's plenty more where that came from. You catch them on tour next in Paris at the famed Le Trianon on September 7th and at Atlanta's ONE Musicfest on September 9th. For more tour dates, check out the trio's Facebook page. As well, you can pre-order August Greene on vinyl via Amazon before it's officially released this Friday.

Peep the fellas doing the damn thing on The Tonight Show below.