Cardi B & Kehlani Got Your Number On ‘Ring’ 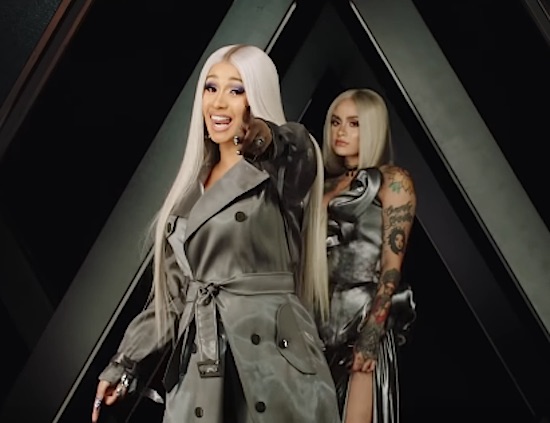 Cardi B might have had to step aside from touring with Bruno Mars on the final leg of his 24K Magic World Tour, but she's not just chilling and breastfeeding during her maternity leave. Bardi is still making music moves, and she's extending her reign as the current queen of rap with her first post-Kulture release, the music video for "Ring" featuring Kehlani.

The rapper and the singer serve up couture looks and rock coordinating sleek, blonde bombshell wigs. The Mike Ho-directed visual is heavy on the telephone imagery to match the duo flaming a brotha for not calling in song. We see Cardi wrapped up in black telephone cords that form her dress and boots while both artists appear in old-school phone booths floating in the sky in other scenes. Cardi and Kehlani come through dripping to put these lame dudes who don't know how to use a phone on blast and notice.

"Ring" is the latest single from Cardi's debut album Invasion of Privacy, which is showing no signs of falling off anytime soon even though she's rumored to have another project dropping later this year. While we wait to see if that's true or not, we know for sure that she's hitting the 2018 MTV Video Music Awards tonight where she's nominated in 10 categories and likely to walk away with a few statues for her mantle.


TAGS:  cardi b, Kehlani, mike ho
Previous: Sting & Shaggy Get Animated For ‘Just One Lifetime’ Next: Disclosure Delivers A Double Dose Of Vibes With ‘Moonlight’ & ‘Where Angels Fear To Tread’