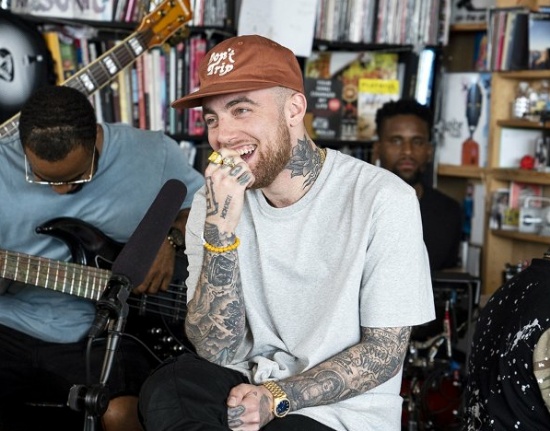 Fresh off the release of his fifth studio album Swimming, Mac Miller opted to celebrate the occasion with an epic performance as part of NPR Music's Tiny Desk Concert series. To further punctuate the groove, the Pittsburgh rapper invited L.A. bass gawd and frequent collaborator Thundercat to accompany him during this performance. We already know these two make musical magic together, and this 15-minute live music masterpiece was no different.

For the first time, Mac performed three tracks from his latest album backed by an incredibly talented band that included Justus West on guitar, Klynik on keys, Joe Cleveland on bass, Kendall Lewis on drums, Melanie Hsu on cello, Leila Walker on viola and Robin Fay-Massie and YaShauna Swan on violins. He chose to kick off the showcase with the album’s lead single “Small Worlds,” with Thundercat in the background playing some sort of shaker contraption. He then transitions into “What’s the Use?” where Thundercat and his signature 6-string bass guitar take center stage.  Mac closes out his set with a stripped down rendition of the reflective “2009” backed by only the keys and the string quartet. The entire performance gives fans a clear view of his current contemplative state, as well as a peek at how far he can potentially go.

Watch NPR’s latest installment of their Tiny Desk Concert series featuring Mac Miller and Thundercat below  and add the full album to your collection from the digital platform of your choice. Be sure to grab tickets for Mac’s The Swimming Tour, which kicks off this fall and includes Thundercat and J.I.D.