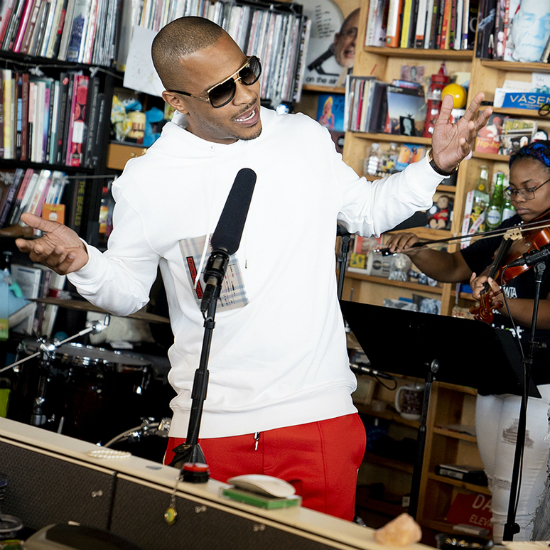 Since this year marks the 15th anniversary of T.I.'s sophomore album Trap Muzik, it's only right that he celebrate the occasion at NPR Music's celebrated Tiny Desk Concert series. Tip made his way to the Washington, D.C. office, along with non-profit Atlanta Music Project - a group of high school string players - to reinvent three of his hit tracks. Adding a classical twist with strings and horns on background, T.I. was in the forefront leading the set with his southern twang for first track "Rubber Band Man."

Without his usual audio prompts, T.I. relied on the assist of a lyric sheet and made his best efforts to remember his own music, stumbling through the set but still adding endearing anecdotes throughout. The King of the South told stories about Diddy during Memorial Day, his house getting raided and more. With his 9-piece teenage band, T.I. moved on to 2006's "What You Know" from King, reminiscing about staying true to the essence of trap music and making the single his way. He later performed "Live Your Life" featuring Rihanna from Paper Trail with the help of the audience since the Bajan bombshell couldn't make it. Keeping it trill, he encouraged NPR staff and guests to put up their middle fingers and wave them in the air.

Currently serving as part of Atlanta Mayor Keisha Lance Bottoms' transition team, what remains the most impressive about T.I. is his spirit of giving back. His backing band, ranging in age from 14 to 17, received an all-expenses-paid trip to Washington, D.C. sponsored by Cricket Wireless and a musical experience they'll never forget. The classical trap twist was a breath of fresh air, and T.I.'s storytelling was also a delight. While we await his next studio album, The Dime Trap, slated to be released later this year we can watch T.I.'s entertaining Tiny Desk Concert until it drops.


TAGS:  Atlanta Music Project, diddy, Keisha Lance Bottoms, rihanna, t.i.
Previous: Sway Clarke Ponders What Went Wrong On ‘I Thought It Was Love’ Next: MAJOR. Switches It Up On ‘Love Me Ole’