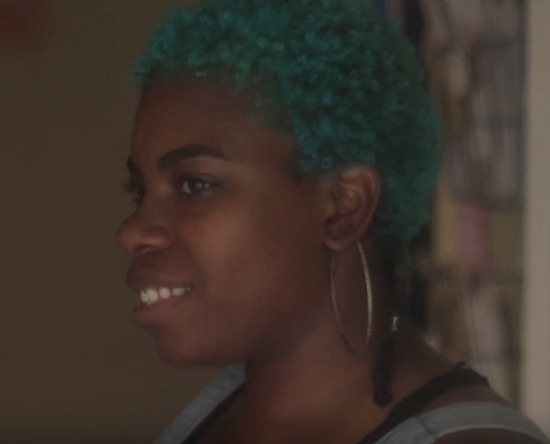 Artist A.yoni Jeffries has a calling that's bigger than her. Not only is she a singer-songwriter, but she is the co-founder of the Durham, NC-based organization Smooth Organic And Progressive Worldwide Inc. (SOAP), which among many things fosters artistry and self-sufficiency in youth. A.yoni's work intersects with her art as she creates accessible spaces, fosters community and encourages people to hear, see and feel themselves in her music. We definitely hear, see and feel A.yoni Jeffries in the music video for her introspective and uplifting song "Searchin 4."

"Let go of your pain / Let go of your past / Wandering eyes, pray you find what you're searching for," A.yoni sings, encouraging both the listener and herself to do some healing and soul-searching. The visual brings the song to life and opens with a scene of a little girl standing outside with her back to the camera while a male voice professes his love and feelings via a voice mail message. The scene cuts to A.yoni asleep in bed and the little girl whispers in her ear, jarring her out of sleep. However, when the camera pans out, the little girl is nowhere to be seen in the room. Was A.yoni dreaming? Is the little girl a ghost? The answer to those questions is both no, as the child represents the singer's younger self, and you realize that's who A.yoni is singing to. Jeffries goes about getting ready for her day and walks through her house, following the path that the playful child leads. Co-directed by Stephaun Perry, Monet Marshall and Jeffries herself, she describes the clip for “Searchin 4" as "an experience that draws you in and brings you to a place where you can face yourself safely.” The engrossing video is a beautiful complement to the song's message.

Press play to watch SoulBounce's exclusive world premiere of "Searchin 4." After you connect with the visual, connect with A.yoni Jeffries on Twitter and Instagram. Add the song to your collection and playlists on Apple Music, Google Play, SoundCloud, Spotify and TIDAL, and look out for more from A.yoni who is recording a full-length project that will be dropping in early 2019.