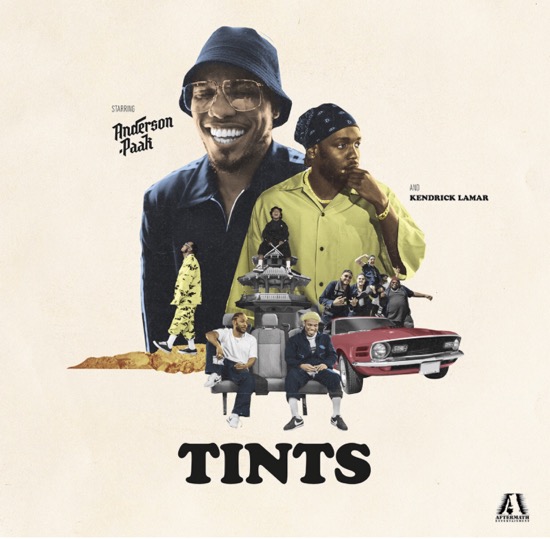 A little over a week ago, Anderson .Paak threw out a major hint of things to come when he posted a picture of himself and fellow Cali native Kendrick Lamar on Instagram. Captioned simply, "October 4th," fans immediately flooded his comments wondering if this meant that a collabo between the two was on the way. Sure enough, that date is officially upon us and with it comes the unveiling of a new single, "Tints."

The single premiered earlier today on Zane Lowe’s Apple Music’s Beats 1 show, and, as we quickly found out, it was well worth the wait thanks to its funky, upbeat vibes. "Tints" finds the two discussing their need for window tint thanks to their evergrowing celebrity. The track, co-produced by Paak and Om'mas Keith, is a bass-heavy, sun-drenched affair that makes it hard to resist bopping along to. The chemistry between the two is immediately palpable, leaving us wondering exactly why it took so long for this pairing to happen.

Of course, it isn't the first time that these two have worked together. Both initially linked up on Dr. Dre's 2015 album, Compton, and then Lamar later featured Andy on the Black Panther soundtrack, which he curated earlier this year. During his Zane Lowe interview, .Paak talked about what its like to work with K. Dot. "He's the most humble, selfless, amazing, focused young gentleman I've ever met. Some people you can trust to just send it and they gonna send it back and it's gonna be flames. I just knew that would be the case with him," he shared.

"Tints" is the second single to come from .Paak's upcoming album, Oxnard, coming on the heels of "Bubblin'." Although there's still no release date set for the album yet, he did reveal that he and Dr. Dre, who serves as the project's executive producer, finished mixing it last month. In addition to the Lamar feature, he also confirmed that both Pusha T and J. Cole also have guest spots on the album, which he calls his best work to date. His excitement about fans getting the chance to hear the new music was on full display when he visited the Beats 1 studios earlier. He jumped on a table, busted out into a little Crip Walk and quickly busted his ass when he fell off of said table. Press play on this fun and funky collab, and it just might have the same effect on you.