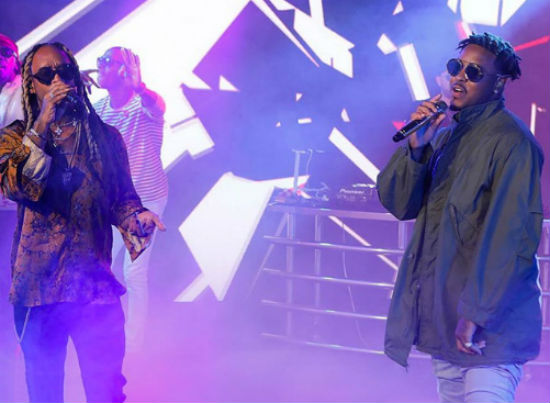 Just days before the release of their album MihTy, Jeremih and Ty Dolla $ign graced the Jimmy Kimmel Live! Hollywood stage with an epic performance of their hit single, “The Light.” With Jeremih donning a cargo jacket with the words “God Save America” on the back and Ty smoothing things out draped in silk, the two rocked the party anthem backed by a live band. A trio of fellas represented for Kappa Alpha Psi, Inc. and got their shimmy on off to the side, while a group of ladies kept it cute on the opposite end. Overall, they were able to recreate the energy and most memorable moments of the video onstage and the audience couldn’t help but party along.

Fans of the duo breathed a sigh of relief when they revealed the artwork, tracklist and official release date for their collaborative album. The cover continues the theme of animation previously seen with their singles "The Light" and "Goin’ Thru Some Thangz," only this time both artists are depicted with halos and are dressed in all black. Though the posted 11-song tracklist doesn’t suggest any features, their previously released single “New Level” was blessed by Lil Wayne and a leaked snippet of the track “Surrounded” included vocals from Chris Brown. We won’t have to wait much longer to see which version of the tracks made it to the official album, however.

Watch Jeremih and Ty Dolla $ign’s performance of the “The Light” on Jimmy Kimmel Live! below, and get ready for the MihTy album to drop on Friday, October 26th.