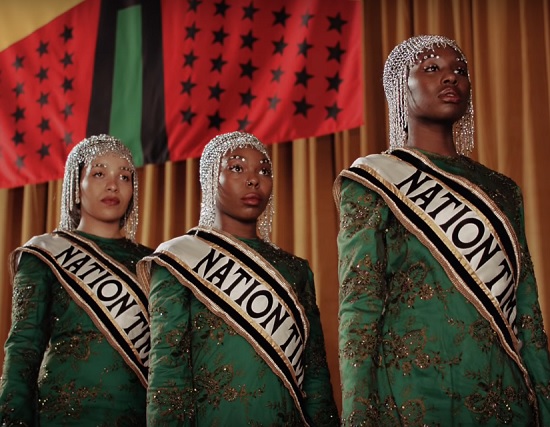 Kamasi Washington's Heaven and Earth has been universally praised as one of 2018's best albums — and rightfully so. The saxophonist crafted an amazing modern jazz landscape that isn't afraid to flaunt its influences while propelling the genre into the future. As well, Kamasi hasn't shied away from providing us with gorgeous, museum-quality visuals from the album with clips for singles "Fists Of Fury" and "Street Fighter Mas." He continues the trend with the latest visual, a clip for his cover of jazz legend Freddie Hubbard's "Hub-Tones."

The song, a 55-year-old piece originally found on Hubbard's album of the same name, already had a timeless verve and swing. Kamasi brings it into the present with a few of his own flourishes — including interesting percussion which adds an African feel to the affair — though he stays mostly true to the original. For the Jenn Nkiru-directed video, he does the same by celebrating Pan-Africanism. The video seems to channel the movement at its height, with the three featured dancers donning sparkling headdresses similar to those worn in the late '60s and seventies by artists like Nina Simone.  That's not the only nod, though, as the women are draped in embroidered green fabric and wearing sashes that say "Nation Time," evoking the need for all people of the African diaspora to come together as one. This, along with the red, black, green and yellow often used to convey black unity and solidarity, gives us a video that makes a powerful political statement without a word ever being uttered.

"As an African-American, a lot of us don't know the country of our origin — that's why most of us take on the ideology of Pan-Africanism," Washington said in a press release. "I was trying to connect to my ancestors by connecting African rhythms with a Freddie Hubbard tune, which gave me that connection in a different way."

Tap into the power of Pan-Africanism by checking out Kamasi Washington's latest artistic vision in "Hub-Tones" below.


TAGS:  freddie hubbard, Jenn Nkiru, Kamasi Washington, nina simone
Previous: This Week In SoulBounce: A New Solange Album Is Coming, Rihanna Turned Down Super Bowl In Protest, Janet Jackson Is A Global Icon & More Next: Emily King Is Back To ‘Remind’ Us Of Her Talented Ways