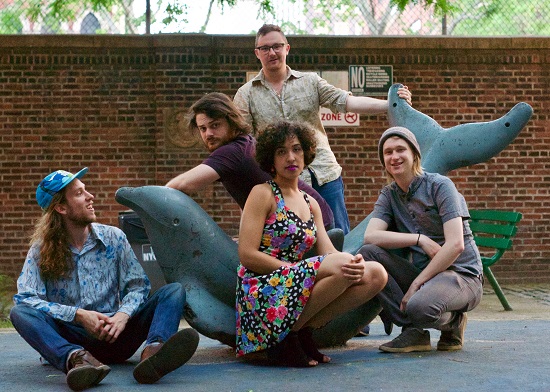 It seems like we've jumped straight from the warm vibrancy of summer directly into the gray days of winter. Despite our weather woes, we've thankfully got music to fill our days with color. That's where NYC-based quintet Valipala comes into play. The lady and gentlemen won rave reviews for last year's Mango City, a six-track affair introducing the world to their unique sound. They're now readying another new release and set the stage with their new single "Yes!," which we happen to have as an exclusive first listen.

"Yes!" feels like audible joy from the very beginning thanks to the soft keys and the band's vocalist Lauren Scales scatting alongside the smooth bassline. She flows along with the song into the verse, on which she sings of that beautiful moment when one realizes that they're in love. As she describes that happiness that could come if she could just make you hers, the groove shifts into a horn-filled swing that expands upon the initial jazz beginnings into funk and soul. The chemistry between Lauren and the band's other members — Evan Lane on trumpet, Aviv Goldgeier on keys, Nick Trautmann on bass and Matti Dunietz on drums — is undeniable and pretty mesmerizing. So much so that it's only sweetened when SoulBounce mainstay Braxton Cook drops in to work his saxophone magic near the song's close. His addition makes an already great song even greater, with the band playing with a fervor that reminds us of the freewheeling abandon that Pieces Of A Dream achieved on "We've Already Said Goodbye."

“We tried to capture the adrenaline rush you get from getting something off your chest that's been bottled up for who knows how long,” Valipala said of the track. They then sang the praises of guest Braxton, saying that "Yes!" was "one of the more difficult pieces of music we’ve written. Not many people out there could handle this tune comfortably, and well, just listen. He absolutely slayed it.”

"Yes!" is just the beginning of what the quintet has in store for us. They're hard at work on their upcoming set bubble, which is set to drop early next year. They're also celebrating the release of "Yes!" with a show at New York's  Lady Stardust (tickets for which are available here). While "Yes!" won't be available to purchase until tomorrow officially, you can be one of the first to get an earful of this goodness when you press play below.