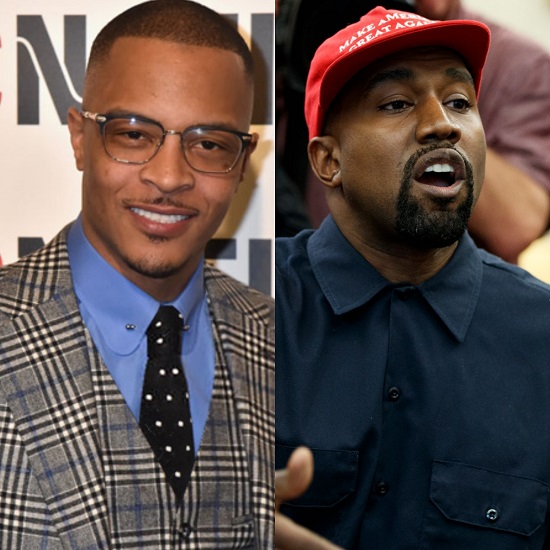 T.I.'s Got Some Words For Kanye West After Trump Stunt

We wish we could go a week without talking about Kanye West. Luckily, the ever-loquacious T.I. is doing the talking for us after Yeezy's latest stunt with the orange fool-in-chief. Like us, the "Rubberband Man" rapper sat in stupefied awe as Ye put on a strange, disjointed show while expressing his support for Trump while he was supposed to be discussing prison reform. Having had enough, T.I. spoke for all of us in a diatribe he posted to Instagram. A choice excerpt: "Now I’ve been extremely patient and made it a point to not jump to any premature conclusions about Ye and his antics. Partially due to the lessons learned from the outcome of other similar situations dealing wit my brother Wayne (which I admittedly mishandled a bit in hindsight). But now this s**t is next level, futuristic Sambo, Hopping Bob, Stephen off Django a** s**t Ye!!!! From what I can gather… this is the most repulsive, disgraceful, embarrassing act of desperation and auctioning off of one’s soul to gain power I’ve ever seen."

Those weren't all the things he had to get off his chest about the wayward rap star, but you'll have to read all that for yourself (and trust us, you definitely want to). We hope this is the last time we'll have to write about Ye for a while, though we have a feeling it definitely won't be. #HeWentIn #AndRightfullySo