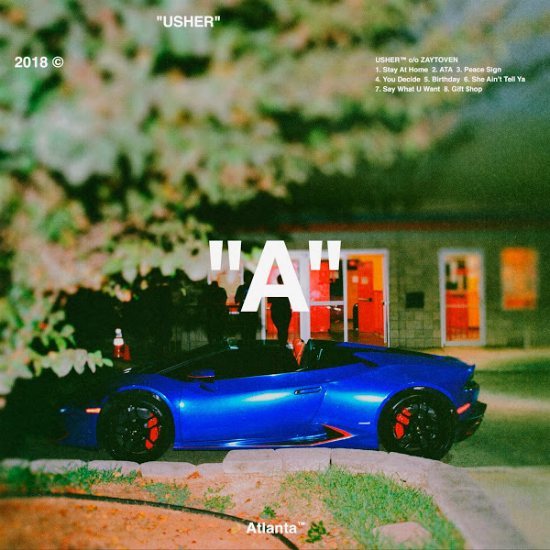 Usher Raymond IV surprised everyone by dropping a teaser video out of nowhere yesterday for his surprise new album, “A.” that he released today. A celebration of his upcoming 40th birthday on October 14th and overall career, the eight-track project is dedicated to the city of Atlanta, which is arguably the most important city in Black music right now. As a former LaFace artist, Usher helped put the Southern city on the map. But while he’s a pioneer of the music scene, the seed he helped plant has grown into something new.

Usher delivered his first single 25 years ago in the age of ‘90s R&B, which has been making a comeback on the scene with many younger artists mining the decade for their sound. Despite the success of artists like Ella Mai and Daniel Caesar, we’re deep in the era of trap soul, where Bryson Tiller, 6LACK, Tory Lanez and PARTYNEXTDOOR are the reigning champs. Usher has had no problem riding different musical waves, from Crunk n’ B with “Yeah” to EDM with “OMG.” But, while the star was able to evolve or emulate the sounds of the times, he’s come to a point where it’s gotten harder and harder. He even attempted to give us a bit of a throwback sound with “Good Kisser” and “She Came To Give It To You,” both still in his wheelhouse but out of tempo with his audience. Usher started experimenting with today’s trap sound on his 2016 project Hard II Love with mixed results.

Can “A” succeed where Hard II Love didn’t? Maybe it will with the help of mega-producer Zaytoven. Known for working with rappers Travis Scott, Gucci Mane and Future on his Beastmode series, his name is synonymous with both trap music and chart toppers. Usher and Zaytoven have a history, working together on his song “Papers” from his 2010 album Raymond V. Raymond. Could a collaboration with a familiar partner yield better results?

The project starts with “Stay At Home” featuring Future, a rumbling, bass-heavy midtempo number about a bad chick who does anything but sit on her hands. Instead, she’s out doing her thing, leaving Usher and Future worried about whether she’s faithful. “You got a rock star. Need to stay your ass at home,” Mr. Raymond finally announces at the end of the track. Usher utilizes what has been infamously popularized as a mumble rap flow, matching Future’s usual cadence. Zaytoven picks things up a bit for “ATA,” with intermittent staccato drumming, keys and, of course, a heavy dose of bass.

Next up is “Peace Sign,” the first true slow jam on the album and the place where Usher starts to shine. He even manages to sell lyrics like, “Legs up like a peace sign.” Usher puts his thing down in the bedroom and in song here. The vibe of the track makes it well-suited for cuffing season and GTD playlists. Zaytoven also shines on "Peace Sign," showing his versatility as a producer, giving us a modern take on a classic slow jam. The magic continues on “You Decide,” a Caribbean-inspired thumper, where Usher implores a woman to forgive him and give him another chance. Usher displays more of his vocal range on this song, and the flautist is snapping on that flute.

Usher celebrates your “Birthday” with a bass-rattling track dedicated to everyone’s favorite holiday. This could become both a strip club and birthday anthem, but the jury is still out. Piano keys open up the track “She Aint Tell Ya,” where Usher lets the next man know he’s been messing with his girl. He brags about letting her drive his car to paying for her plastic surgery. “Say What U Want,” a rumbling slow jam with twinkling piano keys, finds Usher once again begging the woman in his life to stay. The project ends with a trip through the “Gift Shop” featuring Gunna, where Usher continues his braggadocious boasting. “Treat the Gucci store like a gift shop!” He exclaims, along with a few other notes about his money and fame.

Overall, “A” doesn’t get a high score for execution or effort. Zaytoven's beats are for the most part just serviceable, if a bit generic. And Usher doesn’t elevate the material past the usual party and bulls**t. It would be easy to say that grown ass Usher shouldn’t try to do what the kids are doing these days. But an artist shouldn’t be restricted by their past work or age. They need to be free to create. With that said, there’s a difference between being inspired and just following along with a trend. Following trends isn’t the biggest offense here, however. It’s the fact that most of the project just isn’t fun.

A song like “Birthday,” which has its charms, doesn’t have to be a masterpiece – it just needs to feel like it’s getting the party started or keeping you buzzed. But we aren’t sure if the monotonous refrain would keep us engaged or bore us. “Stay At Home” is a nice concept, but it falls apart in execution, as the insecurity and vulnerability that is there in subtext gets lost. It's also unclear what about this album is a tribute to Atlanta or the “A”? While one could guess it’ reflects the sound of the city, beyond using “trap” beats it doesn’t shine through.

As we noticed on his last long-player, his best efforts to keep up with the kids combine his seasoned soul singer showmanship with modern beats. The best moments on "A" are when Usher and Zaytoven complement each other’s strengths instead of trying to put a round peg in a square hole. “Peace Sign,” “You Decide” and “Say What U Want” are highlights because of this. While it’s easy to dismiss the project as just chasing trends for a check, there truly is potential here. But that potential feels squandered.


TAGS:  audio, Future, Gunna, usher, Zaytoven
Previous: Kandi Wants To Know If You’re ‘Ready For This’ Next: This Week In SoulBounce: Kehlani’s Pregnant!, Drake Is The King Of Spotify Streams, T.I. Tears Into Kanye West & More