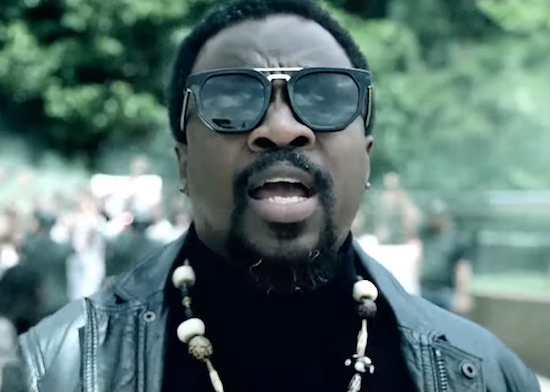 Anthony Hamilton is refusing to be quiet. While that’s not surprising given the fact that he’s a GRAMMY Award-winning singer, this time he’s doing more than just serenading his fans. He’s speaking out about the problems plaguing our country and trying to inspire change. The singer is joining celebrities such as Will Ferrell, Oprah Winfrey and others who are using their star power to make sure people vote in the midterm elections. While Hamilton probably won’t be knocking on your door asking you to vote any time soon, what he is doing is making his voice ring loud and clear across this country with his new single “Love Conquers All” and its dramatic music video.

Produced by Salaam Remi and James Poyser, “Love Conquers All” is a powerful ballad that discusses the issues that marginalized communities are facing in this country, including gun violence, school shootings, police brutality, criminal justice reform and more. And he does it unflinchingly. “How can break the cycle / While being pointed at by a rifle?” AHam passionately sings to open the song. This stark message is delivered over a simple piano accompaniment. The songs is punctuated by a booming chorus where Hamilton shares the answer to society's ills: love.

Directed by Mr. Boomtown, the video for “Love Conquers All” fully embraces the stark narrative of the track. The clip features scenes inspired by stories we’ve heard time and time again. We see a child running through a school being chased by a police officer, a woman having a breakdown from financial strain, a protest turning violent and police harassment. Hamilton stands as the omniscient figure, watching all of these events happen, walking away from the protest dressed like a Black Panther and singing in a church dressed in a bulletproof vest. Not to be too depressing, all this gloom and doom is balanced out with moments of hope, love and understanding. The clip appropriately ends with a voiceover of Dr. Martin Luther King Jr.’s “Breaking The Silence” speech

Why this song? Why now? According to Anthony, “An artist has two choices. Stay quiet or use your voice.” Obviously, Anthony isn’t one to keep his mouth shut. In addition to the single and video, the singer recently visited his hometown radio station, WUNC in Charlotte, NC to have a candid discussion about these topics.

Watch Anthony Hamilton's "Love Conquers All" video right here, and be sure to take all that love to the polls on Tuesday, November 6th to SoulBounce the vote in the midterm elections.


TAGS:  anthony hamilton, Dr. Martin Luther King Jr., james poyser, mr. boomtown, salaam remi"
Previous: THEY. & Jessie Reyez Try To Pick Up The Pieces Of A ‘Broken’ Heart Next: H.E.R. Continues To Reveal Herself On ‘I Used To Know Her: Part 2’